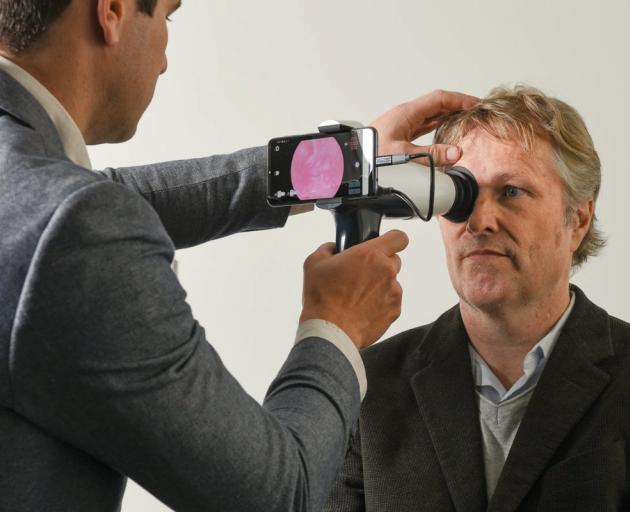 Dr Ben O’Keeffe (left) examines a patient using one of oDocs Eye Care’s devices attached to a smartphone. PHOTO: SUPPLIED
A Dunedin company that makes cheap and easy to access eye-care equipment is in the running for new start-up award worth a quarter of a million dollars. 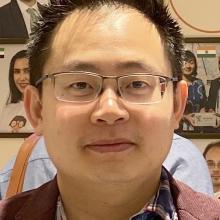 It was chosen from more than 200 entries all trying to win one out of four categories: Next Gen Health, Good for New Zealand, Industry Disruptors and Immersive Experiences.

The ophthalmology start-up is in the Next Gen Health category.

The two doctors started oDocs Eye Care in 2014 and soon created an open-source retinal imaging adaptor that could be accessed in countries that did not have large hospitals with expensive eye-care equipment.

"The goal was to prevent preventable blindness around the world, so your cataracts, your diabetes," Dr O’Keeffe, who is also an international rugby referee and will be a part of this weekend’s Bledisloe test, said.

"The problem is you’ve got this really simple thing that can be found and then treated.

"But third world countries, Pacific Islands, all of these places don’t have the access to firstly get these machines and even have the specialist there available."

The devices they created could be 3-D printed and attached to a smartphone.

"It just meant that anyone around the world could download these — they were cheap," Dr O’Keeffe said.

"And you could actually have a look at the back of someone’s eye, at the retina, and diagnose if someone had had a bleed because of vein occlusion," he said.

They have since gone on to further develop their adaptor and create a wide-field "ophthalmoscope" device.

"The images, whilst they’ll never be the quality of what these big machines are doing, the images we can get are still really good," Dr O’Keeffe said.

"They’ll still really help a GP or a specialist diagnose what is going on, whereas we wouldn’t be able to do that in the first place."

Smartphones were widespread, making it easier to get the devices working, he said.

The two ophthalmologists plan to develop a tele-ophthalmology platform where specialists can access patients in remote places via a video call.

If they win one of the cash prizes in the Spark start-up competition they would put the money towards that and paying staff, Dr O’Keeffe said.

They have until the end of the month to convince a judging panel of local and international industry experts why their idea should be selected.

The winners will be announced on October 28.