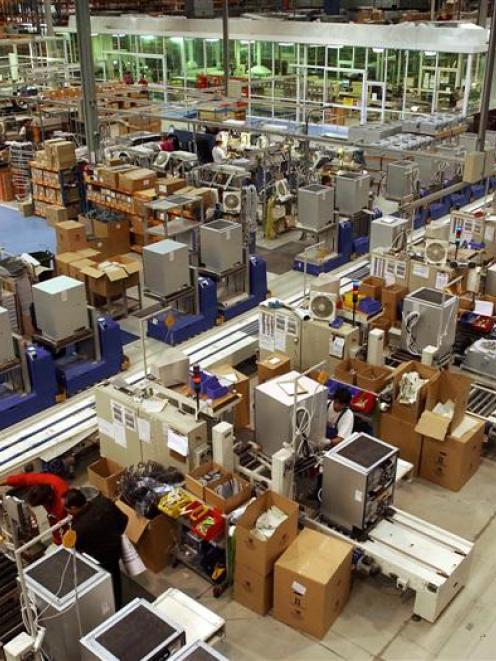 The loss of 430 jobs when Fisher and Paykel Appliances closed and relocated its Mosgiel plant overseas cast a dark shadow on Dunedin's economic performance during 2009. Photo by Craig Baxter.
The closure of Fisher and Paykel Appliances' Mosgiel plant and loss of 430 jobs in early 2008 prompted a reduction in Dunedin's gross domestic product for 2009, and the city remains dogged by low population growth.

However, a report by Berl for Otago Forward, covering 2009, noted per capita growth had kept pace with national trends and the city's education and research sector, which employs one in eight people in the city, also delivered employment and GDP growth above national trends.

"Long term, Dunedin has done well, but its growth may be constrained by low population growth, which tends to suppress employment and GDP [gross domestic product] growth," he said.

The Dunedin City Council's economic development unit manager, Peter Harris, said while not dismissing population growth as being a major issue, the city had to focus on businesses bringing in more income, regardless of whether that was exporting overseas or "selling more to Christchurch".

"Businesses have got to look outside the local market; how many are selling outside the region and bringing money in? We can't rely on local consumption," Mr Harris said.

On the age-old question of Dunedin's low population growth, he said the unit was putting together an application for up to $300,000 in funding from the Ministry of Economic Development to attract Otago alumni back, including those from the University of Otago, Otago Polytechnic and key high schools.

"The people who have been here [in education] are the easiest to convince to come back," he said.

However, productivity in Dunedin was down 10% on the national average, which itself was 30% down on productivity compared with Australia, which meant at those levels wages were lower in Dunedin and therefore less attractive, he said.

Dunedin was hard hit in 2009 considering GDP output on a per capita basis.

Dunedin employment had fallen sharply mainly because of reduced machinery and engineering manufacturing and the loss of Fisher and Paykel's plant, which closed last year to relocate operations overseas.

Otago Chamber of Commerce chief executive John Christie said Dunedin's employment statistics "held up well", considering the recession had been the worst in decades, but by businesses retaining staff, productivity may have been affected.

"It's still a difficult year ahead. Businesses have held on to staff while sales and profitability were down. That could mean more jobs go this year," he said.

Business focus this year should be on generating new orders, which would assist in retaining local jobs and turning falling productivity around.

Dr Nana said lack of population growth could be a major "if not the major" factor, holding up growth in employment, and hence GDP.

"Dunedin's relatively low rate of population growth [0.5% compared with 1% for Otago] may be suppressing stronger economic growth," he said.

Mr Harris said for 2010 he expected a "slow recovery, but with no big bounce".

He believed the Berl report did not fully assess Dunedin's position, such as the full extent of job losses during the period, and said "anecdotally" local businesses were still finding it "tough going" in dealing with the recession.

He said while manufacturing was hard hit by the departure of Fisher and Paykel, there remained a national trend for low-scale high volume manufacturers to move offshore.

"This is not a uniquely Dunedin problem," Mr Harris said.

The emphasis for Dunedin manufacturing had to remain on high-end niche market production.

Germany, the United Kingdom and United States were able to operate in niche markets, despite their high production costs, he said.