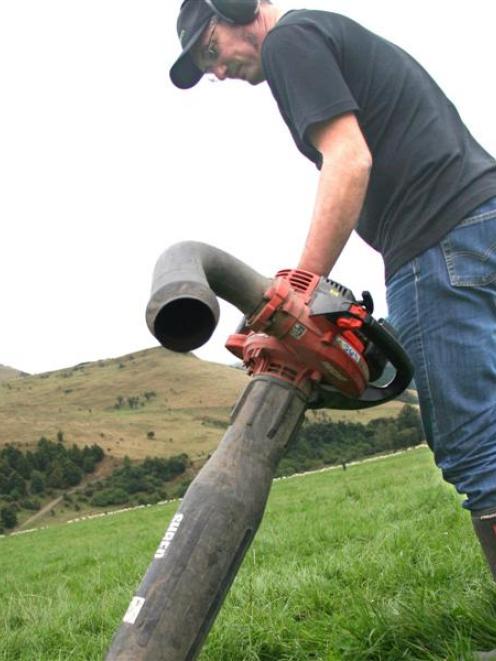 Research scientist Scott Hardwick collects clover root weevils from South Canterbury pasture using a blower-vac. Photo by AgResearch.
An industry-wide effort is under way in Southland to combat the damaging clover root weevil, whose economic damage has been measured in hundreds of millions of dollars nationwide.

Clover root weevil (CRW), identified by distinctive U-shaped notches on clover leaves, was discovered in the Waikato and Auckland in 1996 and has now spread as far as Southland.

A project, involving AgResearch, Beef and Lamb New Zealand, DairyNZ and Environment Southland, which has been releasing parasitised clover root weevils on Southland farms, is being accelerated.

The aim is to collect up to one million weevils infected with the Irish wasp parasite and release them on up to 1000 Southland farms before winter.

Last year's mild winter meant the weevil had taken its foothold on Southland farms to a widespread infestation that had a ''huge'' impact on the production ability of the region's pastures.

AgResearch pest specialist and scientist Colin Ferguson, who is based at Invermay, said CRW had been in Southland since 2010 but large numbers were present in only a few locations, until last year.

The mild conditions allowed a greater number of CRW eggs to hatch, more of the larvae survived the winter and the population ''just exploded''.

Affected farmers were either seeing clover disappear quickly once grazed, or a complete absence of clover plants in their pasture.

''Without clover, farmers can't fatten lambs and those that are looking to overwinter dairy grazers can't do that. It is having a huge impact on farm returns right now,'' he said.

In 2006, a parasitoid wasp was released in New Zealand to help suppress CRW populations.

It laid an egg inside the adult CRW which immediately stopped the weevil from being reproductive.

AgResearch scientists had seen reductions of more than 90% of the CRW population in monitored North Island farms where the wasp had been released.

Last year, AgResearch said the wasp was returning benefits of about $57 per hectare per year, or a total of $353 million per year.

That was based on reductions in CRW populations caused by the wasp and associated increases in clover nitrogen fixation and clover dry matter production.

AgResearch scientist Scott Hardwick, who leads the Lincoln-based CRW collection team, said weevils from Canterbury farmland where the wasp was already at work were being vacuumed up.

''While most of these collected weevils are already parasitised, we boost the parasitism levels by adding a few Irish wasps to the packs of 100 we make up for farm release.

''These packs are then delivered to Southland for release. The result will significantly accelerate spread of the bio-control and the process of clover recovery will begin,'' Dr Hardwick said.

Southland farmers could expect clover content to return to normal levels two to four years after the wasps' arrival on their farms, he said.

Mr Ferguson advised farmers not to panic, saying it would pass over time.

''Although things are going to be tough for the next few years, farmers will get through this with the help of the biocontrol.

''North Island farmers have already gone through this process and clover root weevil is not much of an issue now for any of them,'' he said.

Beef and Lamb New Zealand, in conjunction with AgResearch, is holding four CRW field days in the South this week - today at Waikoikoi at 10am and Glenham at 3pm, and tomorrow at Winton at 10am and Mossburn at 3pm.