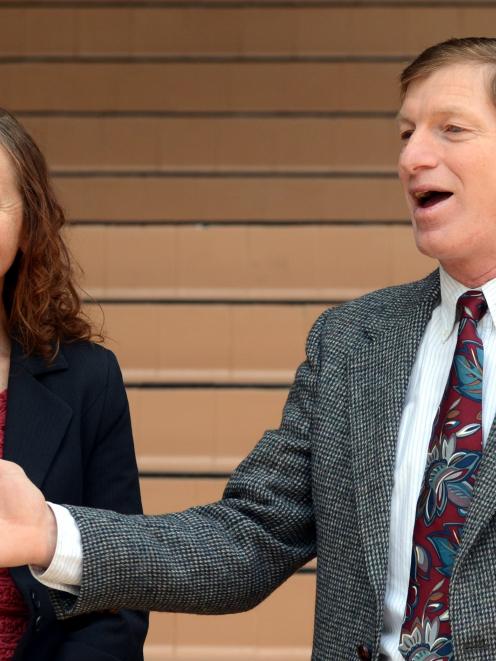 University of Otago academics Dr Helen Roberts and Prof Ralph Adler chat about an upcoming symposium on the pay gap between chief executives and workers. Photo by Peter McIntosh.
People who queried million-dollar salaries could once be dismissed with a simple retort - if you pay peanuts, you get monkeys.

But while the salaries are still rising, some academics are questioning whether there is evidence that big corporate pay leads to high performance.

The question will be thrashed out at a University of Otago symposium in May, organised by Prof Ralph Adler, director of the Otago Centre for Organisational Performance Measurement and Management.

Speakers at the symposium, entitled ''Executive and Employee Salary Differentials: Implications for Organisational Performance'', include The Warehouse Group chief executive Mark Powell, who said last year his $1.7 million pay was a ''ridiculous amount''.

Prof Adler remembers feeling ''quite excited'' when he heard the blunt admission from the corporate chief.

''We've been kind of sold the idea that higher performance is what these high-performing CEOs are about.

''There seems to be a bit of an absence of hard quantifiable data to back up that this is occurring. It seems like the salaries are not necessarily in line with the performance,'' Prof Adler said.

At its heart, it is a question about human nature. Proponents of a school of thought known as ''agency theory'' held a fairly dismal view of human nature, he said. People were lazy, and would cheat: ''So write the contract in a way that ensures their terrible behaviour will at least enrich you''.

He worries it has led to society under-valuing the ''poet, or the lyricist'', and that young people have been conditioned to believe their worth would be measured in a pay packet.

Prof Adler struggles at times to see ''almost any value'' in investment banking, yet its top players reaped the biggest windfalls of all.

The dismal view of human nature had influenced the public sector, pushing up salaries of those heading government departments and public entities.

While not as excessive as the ''out of control'' private sector, top salaries in the public sector were problematic, because public entities had wider goals than returning a profit.

''Some of these theories have spilled over from the private sector and have been moving . . . into the public sector. We believe that the only way to get good people is to pay them a lot of money.

''There's this belief that there's only a certain small number of these talented CEOs, and I think we've been sold something that I don't think is true.''

Another symposium speaker, Dr Helen Roberts, of the accountancy and finance department, researches the links between chief executive pay and an organisation's performance.

She said some chief executives became ''entrenched'' through share ownership, and empire building, their salary set by the size of the company, to which they did not ''necessarily add any value''.

New Zealand had a small pool of directors, who often did not want to rock the boat, she said, and shareholders tended to lack the resources to challenge the salaries given to chief executives.

''It's a number that flashes on the headlines once a year.''

So why did United States investment bank chiefs not predict the financial crisis, given they were at the top of their game?

''In some of those cases, the very rare skill is being able to negotiate massive Government bail-outs,'' he says, adding that he did not necessarily agree with public bail-outs.

Earnings of New Zealand chief executives were not in the same league as in the United States, whose business leaders would ''be laughing at earnings in the $2 million range''.

The ''old joke of paying peanuts to get monkeys'' was true. And the public sector needed to compete for chief executives, or government entities would be run by ''idiots''.

Dr Crampton believes concerns over growing wage inequality in New Zealand were not backed by evidence.