Rising petrol prices as well as rent and mortgage costs have pushed the increase in the cost of living to its highest rate since records began in 2008, new figures reveal.

An academic is warning the higher costs go, the harder it will become for those on lower incomes.

Yesterday, Stats NZ released its household living costs price index, which found the cost of living for the average household over the three months to December 2021 was 5.2% higher than the same period in 2020. 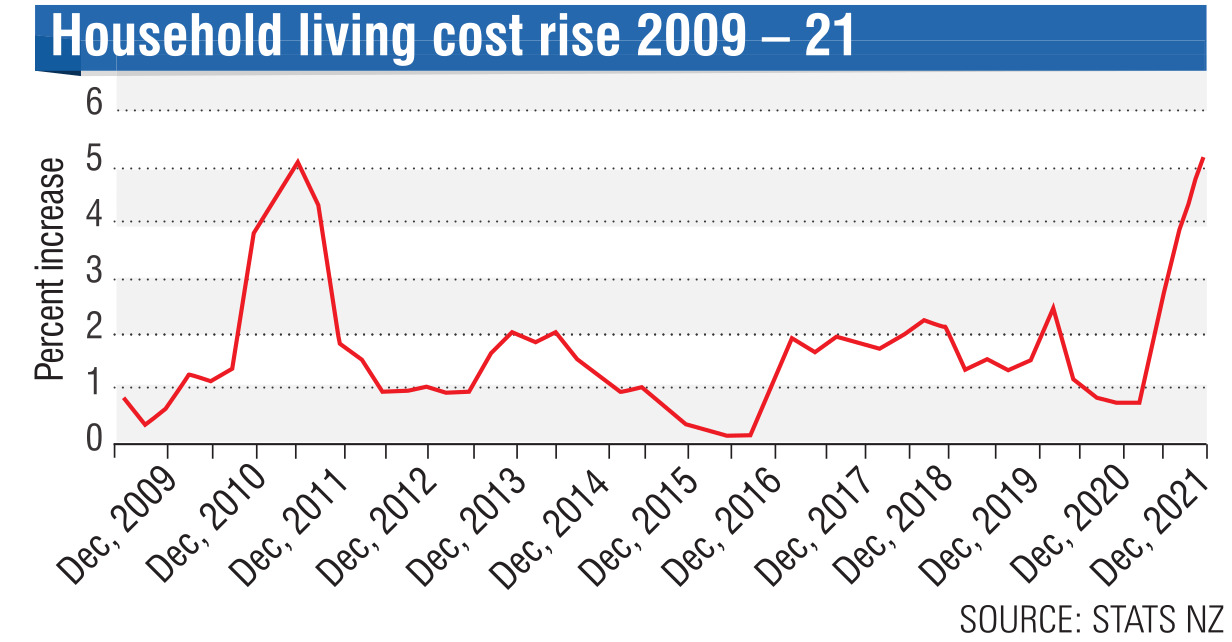 Last month, Stats NZ released its consumer price index (CPI) — which the inflation rate is based on — which rose at the higher rate of 5.9% over the year to the December quarter.

Households with higher expenditure experienced an annual cost of living increase of 5.4% in the 12 months to December 2021. The middle spenders and middle income household group had the same increase.

The biggest influences to the two groups’ lift in living costs were higher prices for petrol, mortgage interest rates, and second-hand cars.

That was also driven by petrol costs, mortgage interest payments and housing rental.

Maori households spend about 20% of their expenditure on rent, compared with 14% for the average household, Stats NZ consumer prices manager Katrina Dewbery said.

"This means that the impact of higher rent prices is felt more by Maori households," she said.

Beneficiary households experienced the lowest annual living-cost inflation, with a 4.8% increase in the 12 months to December 2021.

That was because beneficiary households usually spent a smaller proportion of their expenditure on petrol and interest payments compared with the average household, Mrs Dewbery said.

University of Otago department of economics senior lecturer Dr Murat Ungor believed the numbers were not surprising given how high inflation was at the moment.

However, the higher living costs were, the worse off those on lower incomes would be, particularly given wages were only increasing about 2.6% a year, Dr Ungor said.

"Inflation is going to be with us for a while and those on low incomes are the ones who are impacted the most," he said.

As prices went up, lower-income households’ expenditure rose, meaning they had less to save to invest in long-term projects.

"If people feel the future is not bright, it will create a spiral for them which can trigger depression," Dr Ungor said.

That was an important problem policymakers should be thinking about now, he said.

Stats NZ will release its food price and rental indexes next week.