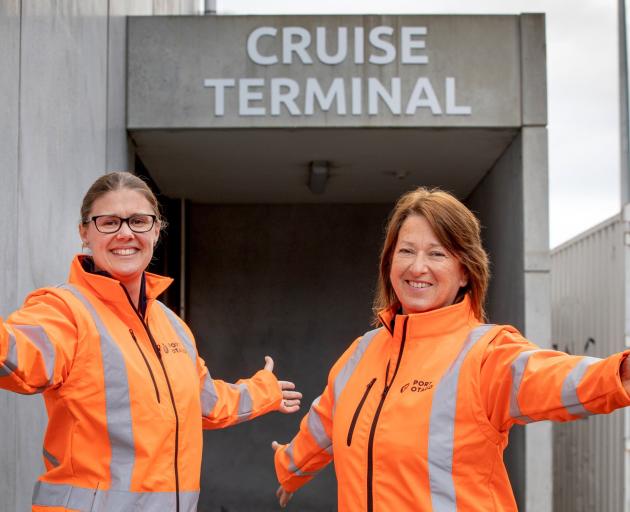 Port Otago cruise team members Carolyn Bennett (left) and Michelle Simpson outside the port’s cruise terminal when the announcement was made in May that the maritime border would reopen at the end of July. PHOTO: SHARRON BENNETT
The countdown is on until the first cruise ship in more than two years berths at Port Chalmers on October 26.

When she heard of Celebrity Eclipse’s booking, Port Otago cruise manager Carolyn Bennett celebrated the news with cruise operations lead Michelle Simpson over a cup of tea and a chocolate fish.

In May, Prime Minister Jacinda Ardern announced cruise ships would be allowed to return to New Zealand waters when the maritime border reopened at the end of July.

Pre-Covid, cruise ships were worth more than $60 million to the Otago economy. The port has retained its cruise staff over the past two years, re-deploying them to other parts of the company.

Ms Bennett, who had taken on the sustainability portfolio which she would also continue, said she could not wait until the arrival of Celebrity Eclipse, and she expected there would be more celebrating as it sailed up the harbour.

"We’ve been waiting for quite some time. To finally know they’re coming back, it just brings Dunedin and particularly Port Chalmers back to life. The vibrancy is amazing."

And she enjoyed having a role that involved dealing with people who were on holiday, and therefore in a good mood.

The team was "bringing everything out of hibernation". For example, the gangways had not been used for several years and needed work done on them and recertification.

In the interim, the cruise terminal had been used for various purposes so there was a tidy-up required and she was also involved in stakeholder meetings. "There’s a long list of little bits and pieces to do."

There was also a focus on health and safety and inductions. The port would be dealing with people who potentially had not been involved with cruises before and they needed to understand key processes.

As people were keen to travel again, she was expecting a "pretty busy season". The port was currently advertising for a cruise co-ordinator.

In Port Otago’s latest newsletter, chief executive Kevin Winders said the announcement was "not a moment too soon".

"Our region is looking forward to the influx of tourists. It’s not just about the money passengers spend while they are here, it’s also about the vibrancy and buzz they create.

"Covid has been a long haul and the return of cruise is positive for the city and region.

"For us at Port Otago, we’re excited about the prospect of coming to work and seeing cruise ships at berth again."