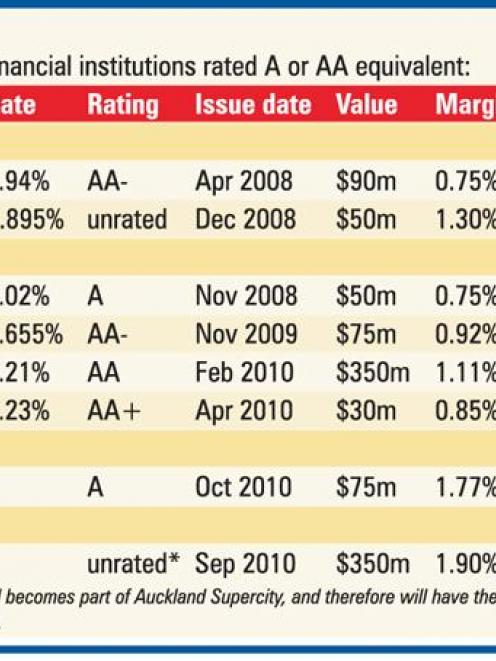 Confusion and misunderstanding remains in the community about how the Dunedin City Council raises money from bonds and who buys those bonds. Business editor Dene Mackenzie unravels the issue with Craigs Investment Partners broker Chris Timms.

It is possible the University of Otago, the Community Trust of Otago and some of the Otago-based religious trusts are holders of the bonds.

These bonds appeal particularly to charitable trusts, which are tax exempt.

The security of the bond and a return of say 8.7% or 6.4%, tax free, is a good return for tax-exempt organisations.

Institutions have a mandate to maintain a specific percentage of bonds rated A or above in their portfolios and are natural investors in the market.

The identity of the holders of Dunedin City Council bonds and the interest being paid by the council to those holders has caused much debate among some sections of the community in recent months.

The term "habitual investors" has caused anxiety among people who believe the investors are anonymous individuals making money from Dunedin City ratepayers.

The term "persons" in legislation such as the Securities Act and the Official Information Act usually refers to corporate entities rather than individuals when the term is used in financial investigations.

While wealthy individuals who make their living from investments could qualify as habitual investors, it does not appear there are any holding DCC bonds.

Some of that $90 million was used to buy the land for the Forsyth Barr Stadium.

Information given to the ODT by a long-time critic of the city council debt programme, Bev Butler, shows Dunedin City Treasury negotiated two separate draw-downs for the $90 million.

The reason that happened was, because of interest rate volatility, the $1 bonds were selling on the market at, for example, $1.05, or another yield more than the face value.

A tap issue allows a bond issuer to go back to the market without issuing a new investment statement by joining up the two lots of debt.

It appears the higher rates were from inter-lending between the Treasury and either council companies or the DCC itself, meaning no outside investors received the higher yields.

Market fluctuations caused higher and lower rates because the bonds were issued at different times.

At the end of September, the $90 million of bonds with the 8.7% yield were trading at a coupon rate of 4.2% because there was less than six months before maturity and as a reflection of interest rate movements.

Criticism has also been levelled at the council for not going to the public, or "mum and dad", investors to raise the money through bonds.

Craigs Investment Partners broker Chris Timms said, generally, the minimum size of a public issue was $75 million, although the Tauranga City Council made a $50 million issue in 2008.

"Depending on the circumstances, they may have to pay an additional margin to get it away in the market.

"If the DCC had wanted to do a public issue in November 2009, they would have had to increase the interest rate paid to make it attractive to the public, particularly given the interest rates on issue by others at the time."

Also, the quality of the issuer and the prevailing economic conditions would ultimately determine the margin and, therefore, the final interest rate, the issuer would have had to pay to get the bonds away, he said.

The $90 million issued by the DCC in mid-April 2008 was in the middle of the global financial crisis and swap rates had completely blown out.

When considering an issue, the usual basis was the comparable benchmark swap rate - the lending rate between financial institutions - at the time of an issue and a margin.

A three-year bond would be issued at a certain percentage margin above the equivalent three-year benchmark swap rate.

Public issues of this kind normally had a minimum holding of $10,000, with increments of $1000 thereafter.

The council had achieved good interest rates through its Standard & Poor's credit rating, better than some other local authorities.

Wellington City, which was unrated, was paying a higher margin than Dunedin, he said.

Ms Butler advised yesterday her complaint to the Ombudsman, David McGee, asking for the "habitual investors" in DCC bonds to be identified had been accepted.

"In the letter it states: 'As a first step in the investigation process, I have written to the chief executive of Dunedin City Treasury Ltd [John Knight] to notify him of your complaint.

I have asked him to provide Mr McGee with the relevant information at issue together with a report on the decision to refuse your request."

Ms Butler said she could make no further comment until after the results of the investigation had been released.