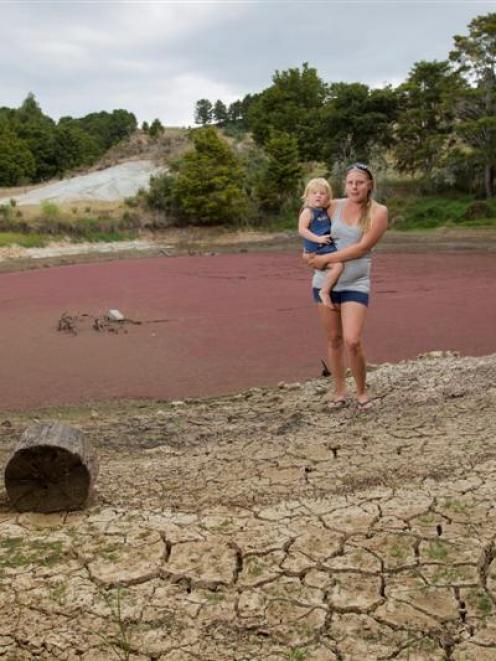 Selene Campbell with her daughter Baylee (2) next to one of the three near-empty dams on their dry farm at Maromaku Valley, in the Far North. Photo by the NZ Herald.
Estimating the cost of the drought in many areas of New Zealand is causing economists problems, even allowing for agriculture and associated activities likely to take a large hit.

The Government has said the drought, the worst in 70 years, could cost the economy $1 billion, but Federated Farmers president Bruce Wills said that was a figure likely to be increasing each day. Calls have now been made for a drought to be officially declared on the West Coast to give farmers some relief from the driest summer since 1947.

With scant rain since February, some farmers are having to sell stock. They are even more worried about how they will get through winter, as they have had to dip into their winter feed to supplement the dried up pastures.

Westpac continued to expect national milk production to post negative growth rates in February, March and April this year, compared with last year - even though the season as a whole might still be up around 2% on last season following a very strong first half.

Profitability was being particularly hard hit as the production decline coincided with rising costs.

For sheep farmers, that came on top of lamb and wool prices both falling by a third over the past year, he said.

The Otago Daily Times reported on Friday sheep and beef farmers were set for a tough time, with profits predicted to half this season.

Beef and Lamb New Zealand's economic service mid-season update estimated farm profit before tax for the 2012-13 season would fall 54% on last season to an average of $73,000 across New Zealand, largely due to sharply lower lamb prices and a consequent 27% fall in sheep revenue.

Mr Steel said that was important at the macroeconomic level as fourth quarter GDP (economic activity) was shaping up to be strong, partly attributed to agriculture.

However, that could not be extrapolated into early 2013.

''We maintain our view that agriculture GDP will contract in the first half of this year, in fact a little more so than we previously had expected.''

In total, Westpac had reduced GDP growth in the first and second quarters of this year by 1% each to 0.6% and 0.5% respectively.

Estimating the impact of the drought on New Zealand's GDP overall was extremely difficult because no-one knew when it would rain and there was not much to compare with, he said.

There were estimates the prolonged and widespread 2007-09 drought knocked overall GDP down by about 1.5%, with 1% coming from the direct hit to agriculture and the remainder from the flow-on effects from the likes of farmers curbing discretionary spending.

The effect this time could easily be 1% of GDP, Mr Steel said.

''It's just a shame that in times like these, the official measures of agriculture GDP offer little insight into what is going on.''

Finance Minister Bill English warned yesterday farmers must adapt to the risk of increased droughts and the Government was unable to support them continually.

Mr English said while the Government was providing support now, that might not be sustainable if severe droughts became regular events.

''If there's going to be more droughts, more regularly, farming practices will simply have to adapt.

''We've got research in places, for instance, to find more drought resistant grasses and farmers have for years been adapting their management practices,'' he told TVNZ's Breakfast.