‘People Lift’ having an effect 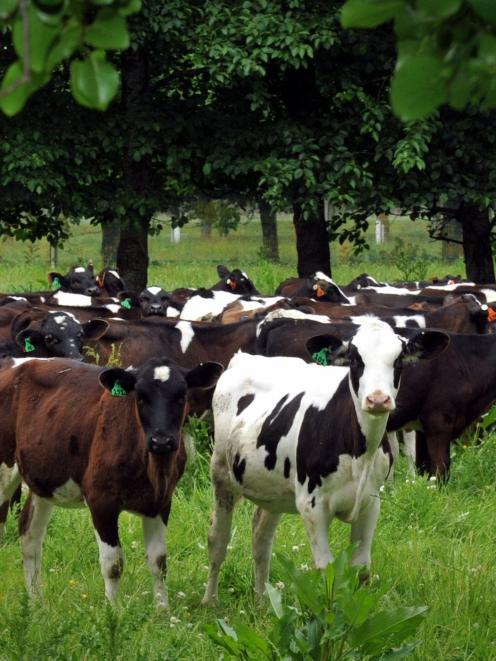 The People Lift programme has led to earlier identification of lameness, reduced calf mortality and fewer problems with ‘‘downer’’ cows. Photo from ODT files.
During challenging times such as those the dairy industry is now experiencing, being efficient on-farm is crucial.

So for Waipahi farm manager James Matheson, being involved in People Lift has been a beneficial experience.

The initiative, which is being trialled in the Waikato and Southland, has been created by DairyNZ.

It is co-funded by farmer levies and the ‘‘Transforming the Dairy Value Chain'' Primary Growth Partnership, which involves the Ministry for Primary Industries and industry partners DairyNZ and Fonterra.

The objective was to lift the quality and competency of farm owners, managers and rural professionals involved in people management and employment relations.

John Greer, from DairyNZ, said there were 12 farmers in Southland and 12 in Waikato in the programme.

It had been running since February last year and already quite a bit of change had been seen. He expected it to be in this second year that more of that change would be bedded in and the effects seen.

The programme was about providing one-to-one support from a people-management consultant, to help improve leadership, and about farmers in the group giving each other peer support.

Each farm had access to four days of consultancy each year.

A series of workshops was held through the year with the group, involving guest speakers. Each farmer had done a ‘‘stocktake'' of their situation and what they wanted to achieve, and come up with ‘‘a bit of a plan''.

Progress on that was being evaluated, with the aim of discovering the on-farm effects

Mr Greer was also involved in a project trying to get more certified people-management consultants working with farmers.

As a result of People Lift, there had already been a big increase in communication between farmers and their team, and more open communication, some of which was over ‘‘tough issues'', Mr Greer said.

Some of the farmers involved had already seen some changes in terms of productivity, and it was expected these would eventually flow through to financial results.

Some of the staff had become so engaged they had been offering ideas about how to better manage the farm and save money in times of lower payouts.

Mr Matheson has been working on a Waipahi dairy farm, owned by Chris Lawlor, for the past five years.

This year, cow numbers had gone up from 500 to 700, which meant increased staff numbers. There were four staff, including himself, and another on a run-off property.

For the young farm manager, People Lift meant learning what ‘‘makes people tick'' and how to give instructions that employees understood. Knowing more about staff translated to getting more out of them, he said.

This year, it was even more important, as everyone needed to be ‘‘pulling their weight'' and being efficient.

There were a lot of characters in the dairy industry and it was about finding the right people and, once they had been found, training them and giving them correct instructions, he said.

People Lift had been a learning curve and it had been ‘‘really good''. He definitely saw more engagement and camaraderie among the team.

Mr Matheson started working on the property as a trainee, just after his 18th birthday. He had no regrets about entering the dairy industry.

He had been building up his own cow numbers and hoped to be able to buy into a farm in the future.

While the current state of the dairy industry made ‘‘everything a bit harder and a bit more stressful'', he was philosophical, saying it could be worse. He would still rather be working on a farm than having an office job, he said.

Mr Lawlor said it all came down to communication ‘‘and understanding what your own weaknesses are first and fixing them first'' before fixing things down through the chain.

Time needed to be made for input from everybody.‘‘It makes you understand the rest of the team,'' he said.

In a season like this, when ‘‘absolutely everything has gone pear-shaped'', he believed the improved communication would mean things would not hit crisis point.