Another storm for NZ sheep industry 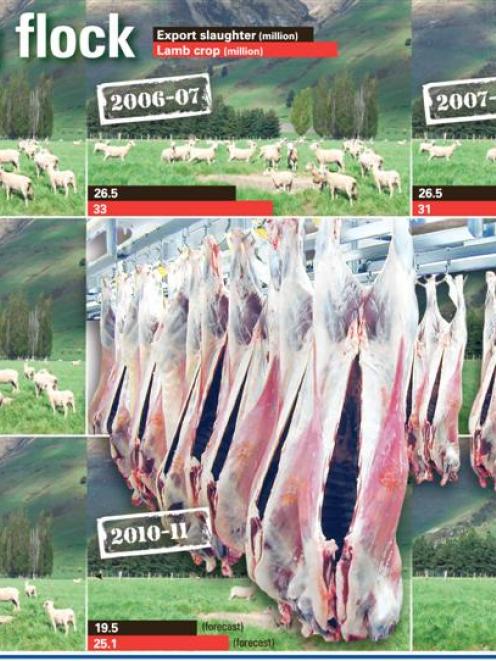 By next September, New Zealand's lamb kill is expected to have fallen six million in six years, raising questions about where it will all end.

Data released by Beef and Lamb New Zealand (BLNZ) late last month, shows that while atrocious spring weather accounted for most of the 2.78 million fewer lambs tailed this spring compared to last, the trend continues to be one of a shrinking sheep flock.

Meat industry leaders, such as Alliance Group chairman Owen Poole, see this trend as opportunity, with the supply and demand balance forcing change to the industry while also adding value.

Others see it as a vicious and uncontrolled erosion of the industry, and say more needs to be done to improve farmer viability by better marketing and promoting sheep meat and strong wool.

Meat workers, who have progressively watched the length of their seasonal employment shrink, face even shorter seasons.

While all processing plants are likely to open this season, those with multiple sheep processing chains may not start them all, reducing labour needs, and cut overtime and night shift work, eroding workers' wages.

The season peak flow, from January to March, is likely to be flatter than usual, due to lower numbers and also as farmers keep lambs longer to increase their size.

Retail lamb prices have risen to record levels to reflect lower sheep numbers and the absence of frozen or stored sheepmeat supplies, but farmers have not seen the full benefit, due to unfavourable exchange rates.

That is likely to change as tight supplies pressure markets further and as meat companies compete for stock to fill orders and processing chains, driving prices to unprecedented levels, but levels not related to market returns.

For many sheep farmers it will not be a windfall year. Higher prices will compensate for having less product available to sell, with the September storm in some extreme cases halving lamb crops.

The reality is that farmers may ultimately pay for this scenario, through plant closures, which seem inevitable given current livestock trends.

Alliance Group chief executive Grant Cuff urged farmers to think beyond the next draft of lambs or the balance of the season, to where they wanted the industry to be and what type of products it should produce.

"It is most unfortunate that this environment encourages stock firms, ticket clippers and independents to try and offer price deals, irrespective of quality of animal or previous commitment intentions."

While Southland and South Otago received all the publicity during September's storm, Mr Cuff said the BLNZ data showed all of New Zealand was affected, with the North Island lamb crop down 9.5% and South Island 10.4%.

Silver Fern Farms chief executive Keith Cooper said the effect of six million fewer lambs in five years had largely been factored in to the procurement environment, but he was more concerned about the future.

"To me, the ongoing impact of this is not just this season's kill, but the impact on land use."

The storm may have longer-term implications. Questions being asked are whether farmers can afford to, let alone want to, rebuild ewe flocks battered by storms, or instead will look at other land uses, such as dairy support.

At least 26 sheep farmers in Otago and Southland are showing their frustration at low and inconsistent income from sheep, by committing to convert their farms to dairying in the coming year, and others are known to be replacing a portion of their ewe flocks with dairy stock grazing.

Most farmers are converting to dairying purely because of economics and not to satisfy a sudden desire to farm cows instead of sheep.

A fundamental question needs to be answered about where the industry is headed, how the decline in sheep numbers can be arrested and who will lead that debate.

Deloitte is working on a strategy for the red meat sector, but the industry's response varies from surrendering to the fact farmers have land use options, to investigating the merits of sheep milking, to creating a plate-to-pasture integrated supply chain for both meat and wool.

But despite widespread frustration at the performance of the meat and wool industries, farmers greet any radical proposals with suspicion and a silo mentality.

Farmers are becoming more hard-nosed and tribal in their attitude, particularly towards competing meat co-operatives.

Change is unlikely this season given $100 forecasts for lamb, but issues of surplus capacity, a procurement system built on competition among processors pushing up the price to farmers and too many exporters pushing down the price to retailers will be addressed, especially if the sheep flock is not rebuilt.

A world shortage of wool has lifted returns while a similar shortage of lamb is pushing up prices for prime and secondary meat cuts and co-products, but given the sector's boom-and-bust history, questions need to be asked as to how long this will last and whether current structures will deliver future prosperity.

This supply-and-demand dynamic appears to be driving much of the sheep industry's response to its problems, rather than repositioning the products in the market, which most observers say is needed to make the industry economically sustainable.

Farmers need to ask themselves if the current structure has made them rich from the production of world-class wool and sheep meat, whether doing as they have always done has delivered them prosperity, and whether they are receiving the full value possible from the selling of their product.

For the good of the industry, it is hoped the current spike in prices does not taint their answers.