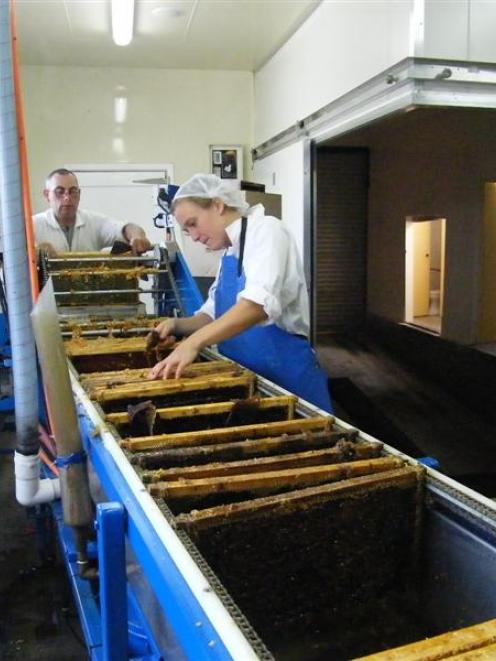 Andrew Crossen and Mel Weatherhead, of Ontario, Canada, uncap the wax from frames of honey at Ashburton Apiaries plant. Photo by Maureen Bishop.
The changeable summer is frustrating not only arable farmers trying to bring in the harvest, but also the country's bees, and ultimately the beekeepers.

To gather nectar, bees like consecutive warm, sunny, settled days with temperatures of 20degC or above. This year's fluctuating temperatures, strong wind and low cloud do not measure up in any way.

And that means a mixed bag for Mid Canterbury beekeepers.

Ashburton beekeeper Roger Bray said he had reports of some areas where honey yields had been ''pretty good'', but others at the other end of the scale.

''The season has dragged out. It is very frustrating,'' he said.

''I think it will be an average season.''

The wide range in yields was also noted by another Ashburton beekeeper, Geoff Bongard, who said he had heard of some beekeepers who might not get honey.

''There has been wind from every quarter, lots of cloud and cool conditions.''

He has no idea yet how much production will be down for his business.

''Canterbury does have some protection at least from drought, thanks to irrigation.''

While a change in land use to dairying has brought the irrigation, there are not many other benefits for beekeepers.

While harvesting of clover-based honey is drawing to close for the season, the harvesting of the distinctive honey dew from beech trees in the foothills of the Southern Alps has begun again.

''It's just at the stage of starting to recommence and will go through to November - providing the bees can collect it,'' Mr Bongard said.

Honey dew is sourced from the sap produced by a small scale insect feeding off the bark in native beech trees.

Providing hives for pollination forms a large part of their business for both men. With a diversification in seed crops in the district, bees are needed to ensure pollination and good seed yields.

Mr Bray said it was a lot more work and could be less income.

He said a move by some farmers to place huge numbers of bees in a crop can `overstock' the area.

''The farmers expect a certain standard for hives and we must ensure that hives are progressing as they should with a good queen. Because of the overstocking there is not a `honey crop' for these hives, unless there is some other flower opportunities for the bees in the area.

''There has been estimation that a gross return of $300 per hive a year is necessary just to keep the wheels spinning.

''This is pretty hard when pollination fees are about $200 and this is perhaps the only opportunity for income from these hives, unless one has access to honey dew sites to take advantage of honey production whilst bees are not in pollination,'' Mr Bray said

Both beekeepers lament the loss of gorse fences and broom, which provided pollen high in protein at a time of the year when other plants were not flowering.

Mr Bongard said they were ''absolutely vital for us''.

''Pollen is available in autumn and spring from these plants. There used to be gorse hedges all round the place, but not now.''

They believe Federated Farmers Trees for Bees programme, which encourages landowners to plant trees which will provide pollen for bees, will not compensate for the loss of gorse and broom throughout the district.

But the biggest threat to honey production is the varroa mite.

''Varroa has the ability to take a business out. It is endemic now and is having a major impact,'' Mr Bongard said.

Beekeepers who had a reduced or non-existent honey season would still have to buy chemicals to control varroa.

''You're looking at $30 to $40 per hive just for the chemicals and it has to be applied twice a year,'' Mr Bongard said.