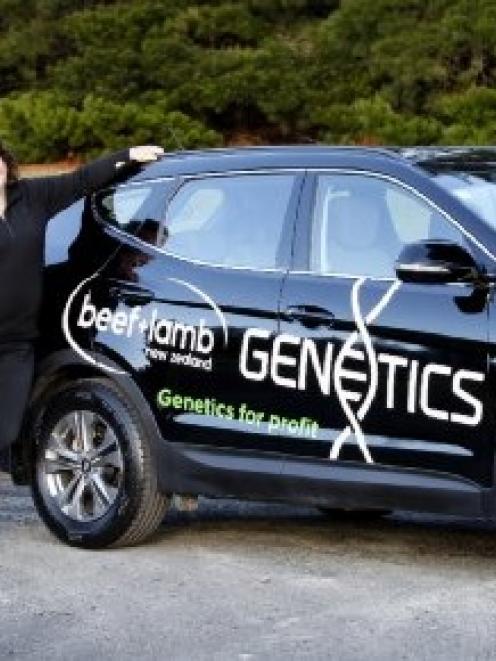 Dr O'Connell is South Island extension officer for Beef and Lamb New Zealand Genetics, a position she took up in August.

Her Dunedin-based role focuses on helping commercial farmers and breeders apply genetics to their business objectives.

Beef and Lamb NZ Genetics was established in 2014 to consolidate sheep and beef genetics research and innovation.

A subsidiary of Beef and Lamb New Zealand, it is funded by sheep and beef farmer levies and the Ministry of Business, Innovation and Employment and supported by meat processors, breed societies and commercial genetics and genomics enterprises.

Dr O'Connell started her career at AgResearch as a technician and scientist in reproductive physiology and sheep genetics. Her PhD explored embryo survival in sheep.

Most recently, she worked for Blue River Dairy as its farm operations manager in Southland for 18 months.

Growing up on a sheep farm at Thornbury, western Southland, Dr O'Connell said she enjoyed helping out on the farm.

She described her father, who ran about 1500 Romney ewes, as ‘‘quite an inventive'' commercial farmer.

Attending boarding school in Gore turned out to be fortuitous as one of the caveats was that she had to do an agricultural science course.

Without that, she might not have realised it was a career she wanted to pursue.

She loved the course and, looking back, started envisaging herself as an agricultural scientist while still in year 9 or 10. She had a ‘‘very colourful'' science background, which had also been fun.

Her move to Blue River Dairy was driven by a desire for more hands-on contact with the farming community and to broaden her expertise in that area.

The company was founded by Southland businessman Keith Neylon in 2003, who converted three Southland sheep farms to dairying.

Its plant, which produced sheep milk, fresh and powder, cheese and ice cream, was sold to Chinese interests earlier this year.

One thing the experience showed her was that while she knew a lot about sheep and reproduction, she knew a lot less about the broader range of farming operations.

There was a ‘‘big wall'' of information coming in, on subjects like nutrition or pasture, and trying to find the right path was tricky.

She developed an appreciation, from a farmer's point of view, for ‘‘cutting through the fog'', and ascertaining what choices were right for them. Those principles were useful now she was ‘‘back on the other side of the fence'', she said.

It was at a Beef and Lamb NZ Genetics sheep breeders forum in Dunedin last year that she attended, representing Blue River Dairy, that she heard about the role she now holds. She thought it would be ideal.

While the job involved some travel, she loved travelling and it was fun to combine that with connecting with farmers. She particularly loved how ‘‘engaged'' farmers were.

The Beef and Lamb NZ Genetics team was small, although it was part of a bigger organisation, which also had benefits. The team was focused on the ability to ‘‘get on and do the job'', she said.

Since starting the role, Dr O'Connell has been learning more about the tools of the SIL database, providing breeders with genetic trend graphs and been involved with running several ram selection workshops.

It was a chance to engage with farmers who were buying rams and helping them to make informed decisions.

It was not about telling them how to run their business, but ensuring they had all the information at their fingertips to make the choices that would best suit them, she said.

She was also helping to contribute to plans around the sheep Central Progeny Test. Beef and Lamb NZ Genetics was adjusting the focus of the CPT to increase relevance for commercial flocks.

The goal was to help breeders and commercial farmers more easily identify genetics that would perform best in their environment, particularly hill country; increase the number and diversity of locations in which testing occurred; increase the number of rams tested; and increase the connectedness of ram breeding flocks across the country.