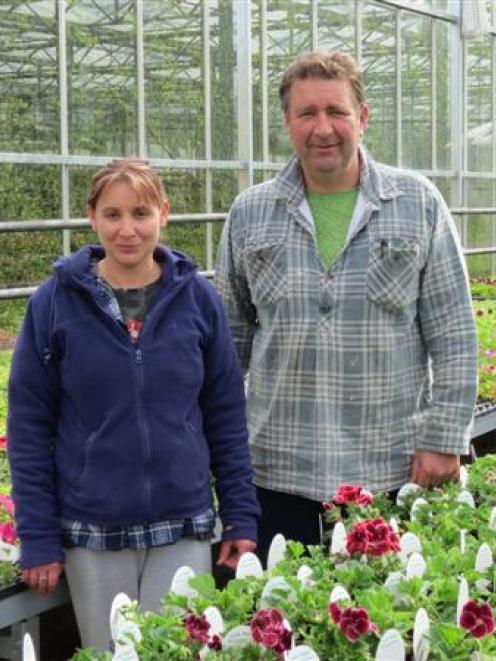 He owns Hayes Wholesale Nurseries and is one of the biggest wholesale growers and suppliers of petunias, Pac geraniums, fuchsias and Pac perlagoniums in New Zealand, and sells to local garden centres as well as national chains throughout the country.

The Makarewa-based nurseryman first became interested in the business when he worked for his parents who owned a garden centre.

He has been in business for 28 years and is going to expand further with the addition of another glasshouse later in the season.

''We are specialist producers and the biggest growers of geraniums and fuchsias in New Zealand.''

They employ five full-time staff and one part-timer. Cat Izzy and Bichon-Maltese-cross dog Puddles are the visitor welcoming committee.

The nursery has three huge 1000sq m glasshouses as well as three propagating houses and a quarantine site, with another to be built this season.

Each glasshouse has automatic venting systems for air circulation and shading curtains that open and close automatically.

''They come across when they sense a certain amount of sunlight,'' he said.

''One degree outside is like 10 degrees inside and on a cold day that can be pleasant, for a while.''

''There is always sufficient for our needs.

A boiler system is used for heating and if there is a power cut there are power generators on site.

Manager Cheyne Mahon said to produce the amount of plants they needed to meet demand they imported cuttings from Germany annually, which were then potted and grown on.

When they arrive at the nursery, the imported cuttings are kept in the nursery's quarantine facility for three to four months until Ministry of Primary Industries' inspectors are happy to release them.

She said four or five cuttings were then taken off each mother plant and grown on and that would happen several times.

The cuttings are repotted until well-established and then shipped out to customers.

They prefer to regularly import new stock rather than utilise existing plants, to remain free of pests and diseases. Mr Hayes said running a quarantine facility was becoming harder and harder.

''We are dealing with moving goal posts so it is not particular easy.

''The rules change all the time, making it harder and more costly to do so.

''We have got to comply if we want to continue doing what we want to do.''

Once the plants had been sent away the glasshouses were all scrubbed down and the process started again.

Mr Hayes said he used peat bark potting mix made to his own recipe.

Water and liquid fertiliser is distributed to the plants through a dripper system and line feed and through flooding holding benches. Very little watering is done by hand.

August and September were the business's busiest months, he said.