Board bid brings skill sets together 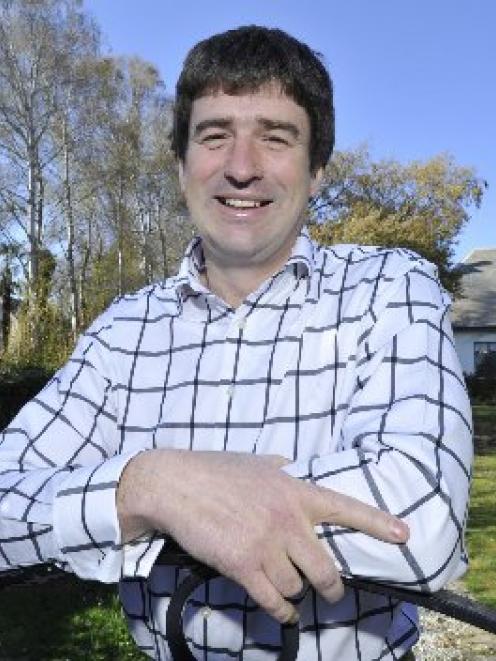 Fonterra board candidate Grant Cochrane describes the dairy co-operative as a "real New Zealand champion". Photo by Gregor Richardson.
From currency trader to Otago farmer, Grant Cochrane has led an interesting life. Now he is looking for another challenge and is seeking election to the board of dairy giant Fonterra, as Sally Rae reports.

Although not from a farming family, Mr Cochrane always had an affinity with the land and, from a very early age, had a passion to go farming.

After completing a bachelor of commerce (finance) degree, he headed to London to start a career in trading.

Finding a job proved a challenge and he worked his way through the yellow pages of the telephone directory, ringing banks.

It was when he got to "R" that he got an interview at the Royal Bank of Canada and secured a job, after offering to work unpaid for a month.

He said he always remembered being given that "first break" and had since helped other people to start their careers.

After his marriage to Andrea in 1999, the couple decided to return to New Zealand to raise a family and to farm.

They have two children, Sophie (10) and Andrew (5), and now live at East Taieri - not far from where he grew up at Wyllies Crossing.

Moving close to Dunedin for the children's education, they have leased out two farms in South Otago.

One is for dairy support and the other is leased, with part being used as a milking platform for the adjacent dairy farm and part as dairy support, while a third farm near Dunedin is still run as a deer operation.

They also have an equity interest in a dairy farm.

Mr Cochrane is also managing director of A.G. Foley Ltd, the South Island's largest plumbing firm, with more than 100 staff, and is involved in an advisory capacity with Oritain Global Ltd, a Dunedin-based company that is pioneering commercial food-origin systems.

Mr Cochrane, who has completed the Fonterra governance development programme, was approached by farmers about standing for Fonterra.

They saw his skills were relevant to what was happening in the global marketplace and also to Trading Among Farmers (TAF).

In June last year, Fonterra shareholders voted overwhelmingly in favour of changes to the co-operative's constitution to allow steps to be taken to implement TAF in the future.

That would involve farmers buying and selling Fonterra shares from one another through a market, rather than via the co-operative.

Dairying was an exciting industry to be involved in and he did not believe that New Zealanders, as a whole, gave credit for what Fonterra had achieved, he said.

With revenue of $19.9 billion for the 2011 financial year and contributing more than a quarter of the country's exports, it created a huge amount of wealth, not just for farmers but "downstream as well".

"Fonterra's a real New Zealand champion, in my eyes," he said.

Mr Cochrane was passionate about farmers consolidating their interests and believed the Fonterra model would work with other industries.

He believed land-use change to dairying would contnue until the structure of the supply chain was "sorted out".

While challenges facing the industry included the Dairy Industry Restructuring Act, the emissions trading scheme and environmental issues, Mr Cochrane believed the "real challenge" was what was happening overseas.

He believed the situation in Europe had the potential to be significantly larger than the 2008 financial crisis.

He expected to see a lot of volatility in commodity prices, exchange rates and interest rates in the next year.

Fonterra was in good shape, with a strong balance sheet, and it was well placed to weather any storms, he said.

He said he got bored if he was not stimulated, and being a director of Fonterra would be a very big challenge.

He would love the opportunity to make a contribution to both the co-operative and the industry.

He wanted his children to have the same opportunities that the current generation of farmers had and that could only be achieved "with a strong Fonterra", he said.

The 11 years spent overseas were "defining" years for him.

It was a stressful working environment that was all about performance.

Success in that environment required a strength of character and independence of thought - attributes that were necessary for good governance.

Mr Cochrane, who still does some trading "from time to time", said he could not wish for a better lifestyle.