Cow pacifier benefits worth rising early to crow about 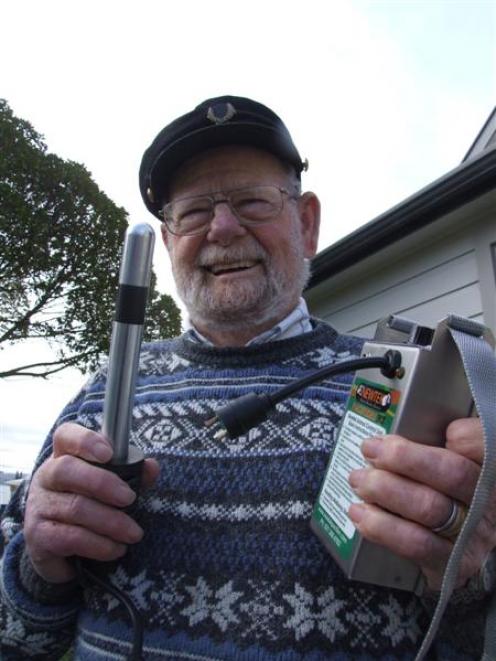 John Brown holds a Newtek Pacifier, which he has been selling to dairy farmers in North Otago. Photo by Sally Rae.
Some mornings, John Brown gets up at 5am to head out to North Otago dairy farms to demonstrate a tool to calm cattle.

Nothing unusual about that except, at 87, Mr Brown could be entitled to stay in bed a little longer. But he is passionate about the product.

The Newtek Pacifier is a probe-type implement which is inserted into the rectum of a cow and stimulates the animal's nervous system with weak electronic impulses.

That controlled the muscular movement of the animal, lowered its stress levels and calmed it down, allowing treatments to be performed.

The sprightly octogenarian aimed to be at properties during milking - "if you're there and the cows are kicking and playing up and raising hell, they can't say 'no, we don't have any problems; our herds are very quiet'."

"It's no good me going when the cows are way out on the grazing because what are you going to talk about?" he said.

Mr Brown heard about the device, which was developed in South Africa, while attending the wedding of his grandson, who farms near Mataura.

After being told about them and what they did, "I damn near bought one right there and then", he said, laughing.

Born in Akaroa, where his father was a lighthouse keeper, he learned his selling skills in the United States, where he was a top vacuum-cleaner salesman.

He started his own insulation business, Insulfluf, in Mosgiel, and was involved in the industry from the 1950s until 1984.

Coincidentally, Mr Brown's very first job was milking 75 cows, which "took forever and a day", at Pine Bush, near Invercargill.

Playing down his sales skills - "it's the product ... it sells itself" - Mr Brown said he enjoyed the contact with farmers, whom he described as "salt of the earth".

They were impressed with the pacifier, which he described as "magic" as it calmed the cattle and made them quiet.

"They can't kick you with this product. You do what you want, trim a hoof ... put a tag in the ear. They just stand there and let you do it," he said.

Sales were going well and he loved his job, Mr Brown said.