Dairy farmers warned to watch out for ergot 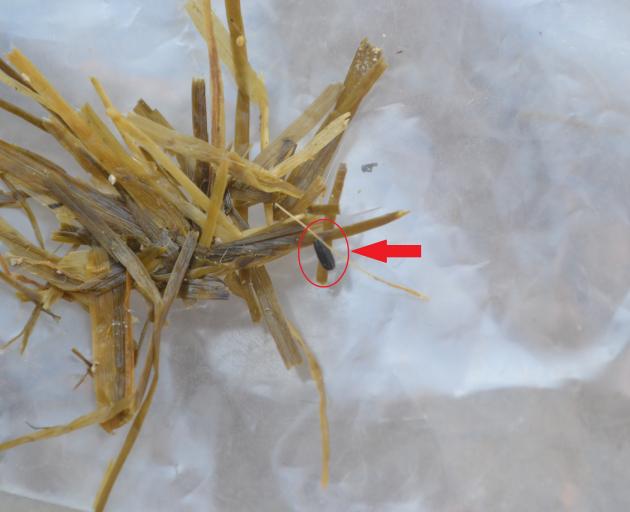 Ergot appears as long purple/black structures in the place where normal seeds should be. Photo: MPI
Three dairy farms in Southland and South Otago have been affected by ergot poisoning after feeding infected ryegrass to dairy cattle.

To date, only dairy cows had been affected but ergot poisoning can affect other animals.

Ergot is a naturally occurring fungus which can affect grains and grasses, and produces potent alkaloids poisonous to animals.

Ryegrass infected with ergot could be identified by the presence of ergot bodies - long purple to black structures in the place where normal seeds should be, he said.

The most recent outbreak prior to this month had been in 2013 in Rangitikei and Manawatu areas.

Reporting of ergot was not mandatory, so the MPI did not have any data on how regular ergot poisoning was, he said.

The MPI's main focus was to make farmers and veterinarians aware the issue was occurring and for them to be vigilant, he said.

The MPI encouraged farmers to watch cattle being fed ryegrass baleage or silage and to call a vet if any signs of ergotism were noticed.

''Signs of ergotism can include lameness, failure to rise, poor doing, and in severe cases cold and necrotic lower limbs. It is important to note that ergot can be toxic to any species and class of animal, so affected feed should be disposed of properly.''

Under the Agricultural Compounds and Veterinary Medicines Act, feed affected by ergot was not fit-for-purpose and should not be fed to animals.

Furthermore, responsibilities under the Animal Welfare Act and the Animal Products Act include preventing access to the feed, providing veterinary treatment, and not transporting affected animals, the spokesman said.

MPI has published an advisory for people to help identify ergot if it is present in animal feeds and the signs of ergot toxicity at www.foodsafety.govt/industry/acvm.

Cases could be reported to acvm-adverseevents@mpi.govt.nz.