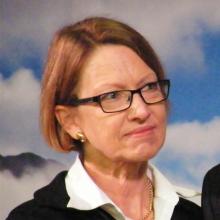 When she looked at irrigation, she saw organic matter growing in the soil, schedules being met and therefore happy bank managers because farmers could guarantee their income stream.

It provided income to control rabbits, wilding pines — "and whatever else you want to do", she said.

Viewing the irrigation development at Matakanui Station in Central Otago during a field day last week, Dr Rowarth said she could see where fertiliser had been used and it was growing grass —and she could see the major limitation was water.

There was a large amount of water in New Zealand and most of it went "out to sea".

"I wouldn’t be taxing it when it’s supporting the rest of the economy," she said, referring to Labour’s pre-election plans for a water tax.

The focus should be on animal protein that was produced sustainably. Selling water in a bottle did not produce protein. She believed in using the water and then letting it go out to sea, she said.

The major problem with swimmability was with sediment and sediment problems were caused by forestry, construction, cropping and then pastoral. New Zealand’s rivers were some of the best in the world, she said.

The EPA’s work was diverse covering hazardous substances approvals and compliance, approvals for GMs and new organisms, environmental effects of activities in the Exclusive Economic Zone and continental shelf, environmental effects of projects of national significance, Emissions Trading Scheme, import and export of hazardous waste, and permitting regime for reducing use of ozone-depleting substances.

It was an independent group but it was an authority for the Government.  She described herself as being about balance.

"I’m about considering what the alternatives are and if they might have unintended consequences which might be worse."

With the vote due in Europe as to whether glyphosate should be banned, she said there was no evidence to say it was causing cancer.

When it came to possible unintended consequences of synthetic foods, Dr Rowarth believed that would be micronutrient deficiency.

She did not see anything that had been created that "actually makes up for real meat and milk".

New Zealand’s role was to produce a premium product and there should be more work on preservation and packaging. Nobody produced animal protein as sustainably as New Zealand did.

Some synthetic food products used GM, and most were plant-based. Cropping used fertiliser and chemicals, he said.

On regional development, Irrigation New Zealand board member John Donkers said:  "I would hate to think what this area, or parts of North Otago or Canterbury, would look like without irrigation. How good would Alexandra be? How vibrant would it be?"

Irrigation had changed places like Oamaru, making it much more resilient. Ashburton now had a population to warrant a hospital.

New Zealand was the ‘‘lucky country’’ in terms of water. It had the second-highest rainfall per head of population in the world yet struggled, at times, with water reliability. That was not because the water was not there but because of infrastructure, he said.

On Matakanui Station, about 5% of the total farm area was irrigated and it would be interesting to see what the business would look like without that, he said.

Also in Central Otago, irrigation was used for the likes of cherries, summer fruit and apple production, and grapes, which highlighted irrigation’s importance to food supplies.