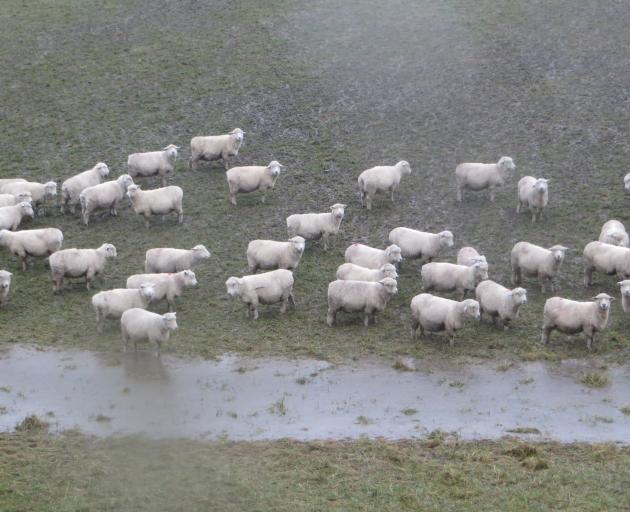 Bedraggled sheep seek shelter from the rain in Waianakarua, on July 21. Photo: Shannon Gillies
Farmers are managing well after the July 21 floods but should not hesitate to seek help in the weeks to come.

That is the message from Rural Support Trust co-ordinators throughout the region.

North Otago administrator Andrea Ludemann said she had not received many calls yet - which was also the case from the Taieri area south of Dunedin, where severe flooding forced many evacuations.

''Farmers are coping with day-to-day stuff well in the short term.''

They would be running on adrenaline while responding to the heavy rainfall and its immediate effects, Ms Ludemann said. Some of the implications would not be known until later on, and they could ''tip the scale'' for some people.

Farmers were used to dealing with factors beyond their control, but those factors could accumulate to become overwhelming. Personal issues as well as farming-related ones could contribute to rural stress, Ms Ludemann said.

If people were concerned that farmers they knew were not making good decisions, that might be a sign they needed help.

One simple way a community could watch out for each other, even in the middle of a busy season, was to hold a quick pot-luck tea with a 9pm finish time, Ms Ludemann said.

''Most people have got options for feed.''

It helped that since the rain stopped, the region had had ''three lovely days in a row'', Mr Hewson said.

He urged farmers to look out for their neighbours. Most calls to the trust were made by people concerned about others' wellbeing, not by the sufferer personally.

Calls from landlines to the trust's free phone, 0800 787-254, would be answered by someone in the relevant area. Calls from cellphones would be directed to the area.

Mid Canterbury Rural Support Trust co-ordinator Allan Baird said his branch had not received any calls since the floods, but emphasised people should phone whenever they needed to.

Federated Farmers has activated its helpline, asking farmers who can offer grazing or feed to phone 0800 327-646. Those who need feed should also log in.