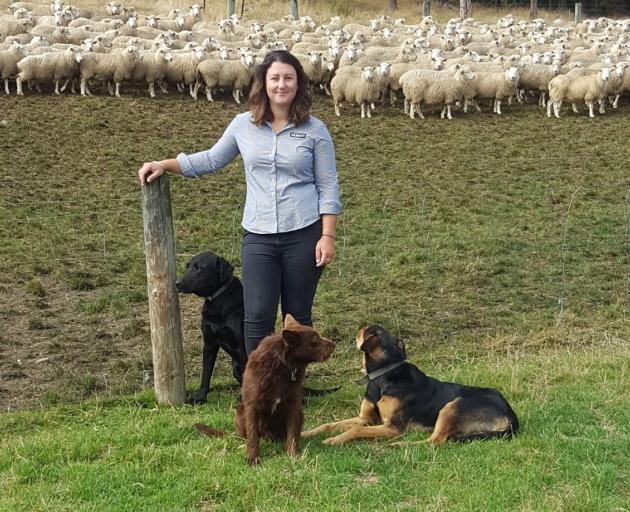 Tara Dwyer enjoys helping farmers to solve issues. Photo supplied.
Every day, Tara Dwyer gets to talk to farmers about their businesses and the issues they face.

Miss Dwyer (24) returned to New Zealand last year, after a stint working in Australia, to join FarmIQ in a sales role.

It was whetted by an interest in entering the farming support sector and how technology could help in farming.

Growing up on a sheep and beef farm south of Oamaru, she helped out on the farm but it was not until her last year at St Kevin's College that she decided she wanted to enter the agricultural industry.

She completed an agricultural science degree at Lincoln University, a ''fantastic'' experience and also an opportunity to also make life-long friends.

After finishing at the end of 2014, she headed to Tasmania to work on farms with her partner Angus Barr.

It was a similar climate to Central Otago and she was working mainly on merino and cereal cropping properties. She was a shepherd initially and then moved into more of a management role.

Tasmanian farming had many similar challenges to New Zealand, including getting good, motivated labour and managing the environment.

''In the last 12 months we were there they had the worst drought for 30 or 40 years. We had to manage the stock to ensure their health and wellbeing while also managing the land so that at the end of summer there wouldn't be just dirt,'' she said.

She believed Tasmanian sheep and cattle farmers were generally about five to eight years behind New Zealand.

They were ''behind the ball'' with adapting technology and new ways of farming. There was also not the pressure that New Zealand farmers had, with Australia having such a strong domestic market.

She was now living at Ettrick where Mr Barr managed a sheep and cattle property. She was used to living in small communities and she was enjoying it, along with her job.

''I get to go out every day and talk with farmers about their business and, more to the point, the issues they face.

''Being able to help them use it to resolve these is rewarding. FarmIQ can offer them an immediate solution to many of the problems they face.

''There is so much information on a farm every single day that is not being captured. We can help them capture that and make something of it. That might be pasture information, for example. Farmers can use a whole realm of data to better understand and manage what is going on. It's measuring to manage.''

It was all about relationships with her clients. Selling the FarmIQ product to them was a very small part of it, she said.

It was about long-term relationships with farmers to help them use the product to get the most out of it and ultimately make better farm management decisions.

She believed there was a lot of opportunities in the farming sector. ''I like that any person can achieve anything in farming if they are willing to get stuck in and do the work and solve the problems they're faced with. And you can see what you have achieved fairly quickly too,'' she said.

There were ''huge opportunities'' a lot of people were missing to record information that was ''pretty crucial'' to knowing what was going on with their land, whether that was stock management or pasture related.

Otago could be a challenging area to convince some farmers to adapt new ideas but the world was ''definitely starting to move'' and awareness was increasing.

Her favourite part of the role was talking to farmers about their different issues, which varied throughout the region, and ''nutting out'' how she could help them.

In her spare time, Miss Dwyer enjoyed helping on the farm that Mr Barr managed and she had also been a member of Young Farmers ''on and off'' since secondary school.

The Teviot Valley Young Farmers club, of which she was a member, was a ''pretty strong club''. It hosted the Otago-Southland regional final of the FMG Young Farmer of the Year last month.

Miss Dwyer, whose father Kerry won the grand final in 1990, was keen to have a crack herself at some stage.