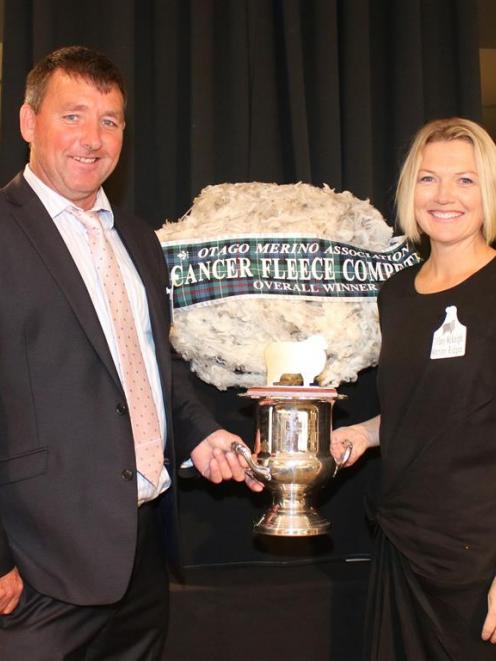 Bevan and Tiffany McKnight with their award-winning fleece in the Child Cancer Foundation fleece competition. Photo by Barbara Newton.
"A breath of fresh air for fine wool'' is how Central Otago farmer Bevan McKnight describes a $45 million deal between Italian textile company Reda and the New Zealand Merino Company.

Under a five-year contract to source fine wool from NZM, 2500 tonnes will be shipped to Italy to fuel the growth of Reda's high-end suiting fabrics and active product ranges.

Mr McKnight and his wife, Tiffany, of Merino Ridges, in the Ida Valley, were ‘‘absolutely'' passionate about merino sheep.

But it had not been easy in recent times, especially for superfine growers, and it was nice to finally see some reward for those who had "stuck with it'', he said.

"It's really quite exciting for us that produce the Italian type of wool. The fact that it's five years and rewards quality gives us good direction on what Reda needs. It means a lot to be able to budget that far forward and plan for growth. We've got something to aim for.''

A record 147 entries were received for the competition and it was a "big thrill'' to win.

They entered it regularly and while they had had a few placings in their category in the past, it was the first time they had won the overall title.

It was a clear message to growers to produce high-quality wool, with significant financial incentive to do that, he said.

The deal was the first of that length for NZM and its growers to supply fine Italian-type wools in the 15.8-19.2 micron range.

The multi-year deal was proof that direct partnerships offered compelling benefits and were the way forward for New Zealand's primary sector.

The sector had to find a way to shift from commodity fluctuations into price certainty and connect growers through to end markets.

The Reda deal was an exemplar of that, Mr Brakenridge said.

"The volatility of boom-or-bust global commodity markets means someone always loses out, be it those that make the products or those that buy them.

"Reda have been exceptionally innovative in their approach to this contract. By removing the vagaries of the open market and developing a model that guarantees supply of quality wool with a higher value over longer period, they have created a win-win.

"They get the volume of high-quality wool they require and growers get the certainty of good prices for their wool for longer,'' he said.

The market for fine wool had been highly volatile, with companies reluctant to place multi-year contracts.

Oversupply out of Australia had suppressed prices for the past few years, so securing a high-value contract of such length was a "big deal'' for growers, he said.

Giving a dairy industry comparison, Mr Brakenridge likened it to a $7-plus milk payout guaranteed for five years.

The response from growers had been "overwhelmingly'' in support.

Based in Biella in the north of Italy, Reda is a 150-year-old company exporting to American, European, Asian and Middle Eastern markets.

At the time of the global financial crisis, Reda was producing traditional suiting fabrics.

It then demonstrated what could be done with new uses for wool, diversifying into the active outdoors market with the launch of sports brand Rewoolution in 2012.

Its fabrics were used in sportswear, as lining for ski boots and helmets, and in boardshorts, waterproof jackets and footwear.

Sales were now increasing at a rapid rate, which was a real credit to a traditional business that had reinvented itself, Mr Brakenridge said.