Focus on consumers behind Pasture to Plate success 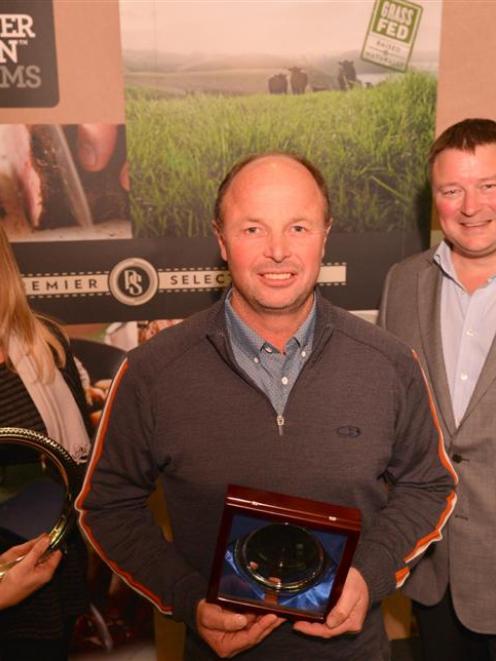 Mr Oliver and his wife Karen were the overall winners of the Silver Fern Farms' Pasture to Plate Award.

Silver Fern Farms chairman Rob Hewett said the couple impressed the judges with their focus on the consumer.

The second round was an on-farm assessment of the four regional winners by a panel of three.

The regional finalists were Robin and Tania McKenzie, from Clinton, David and James Hyde, from Scargill Valley, Landcorp Wairio, from Featherston, and Mr and Mrs Oliver.

Speaking at the awards presentation, Mr Hewett told the farmers that it was their operations that underpinned the success of the business.

To be able to recognise them as winners in their regions was a ''great pleasure'' and all four were worthy contenders of the title.

Mr and Mrs Oliver have two properties in the King Country - Three Rivers Ag Ltd, which won Pasture to Plate, and the home property.

The two properties comprised a total of about 1480ha, running sheep, beef and deer. Managers were employed on both farms.

Mr Oliver said Pasture to Plate was a ''really good process'' to go through, while his wife said winning the title was ''very unexpected''.

Family and people were very important in their farming operation.

They were very proud that some past employees had gone on to manage ''bigger and better farms''.

Mr Oliver talked to the two managers every day and each month they both wrote monthly reports, with a review of what had been done over the past month, including Occupational Safety and Health, stock reconciliation and animal health records, and plans for the next month.

The couple had a business plan, a board of governance, an accommodation business and their three children, aged from 11 to 15, took part in business discussions.

It was important consumers saw that what they did on the farm met their values and that the animals led a natural and healthy life, Mrs Oliver said.

Mr Oliver, who has a commerce degree, believed the red meat sector had a great future, because of the product's health benefits.

He had a strong belief in brands, saying he believed it was the only way to go to keep the value in the products, and he was very supportive of Silver Fern Farms' branded strategy.

Mr Hewett was part of the delegation of red meat exporters, led by the Meat Industry Association, that went to China earlier this month, meeting Chinese regulatory agencies, industry bodies and customers.

He returned ''very confident'' there was a ''huge future'' in China. The market was affluent, consumption among the middle-class was changing from chicken and pork to red meat, and they wanted New Zealand's product.

China's domestic production of beef and lamb was ''going through the floor'', driven by land-use change, environmental pollution and central planning, he said.