Fruit early, but shortage of workers 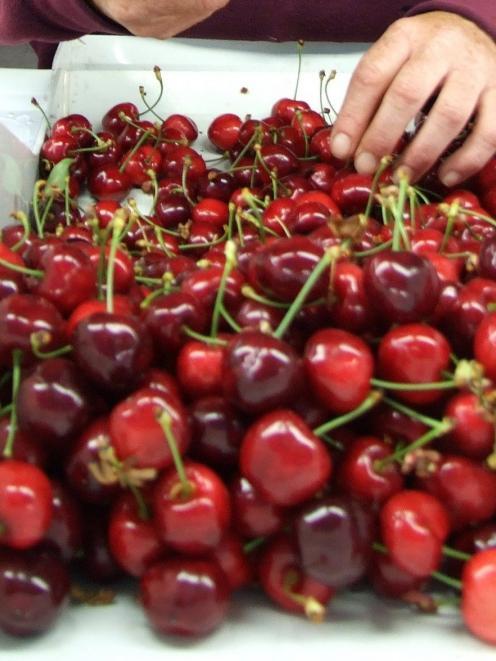 Cherries. Photo: ODT files
Cromwell and Roxburgh orchardists are intending to start harvesting cherries this week, which is up to 10 days earlier than usual.

However, there is also a shortage of workers.

Orchardists spoken to by Southern Rural Life said at this early stage of the season, the region's crops of cherries and apricots were shaping up as some of the best there had been for a few years, thanks to the milder spring.

Cromwell orchardist Mark Jackson, of Jacksons' Orchard, said everyone he had talked to was ''pretty happy'' with the season so far and with the way the crops looked.

He said cherries were the best he had seen for some time and his crews started picking Earlise and Burlat varieties this week.

They were working on apricots, nectarines and peaches, and he was pleased with them as well.

He said the weather had also been good, the rain early last week was needed and there had been no frosts.

Caithness Orchard owner Alex Gordon, of Roxburgh, is also pleased with the season so far, saying it has been better than some other years.

''We are going to have a huge crop of apricots,'' he said.

''We had a big job of thinning and we took off probably about 80% of the fruit off the tree to make it manageable.

''Everybody is having to work longer hours and extra days and staff are at a premium.''

He said the heavy rain early last week was welcome.

''A bit of irrigation from the sky is better than what we have to put on the ground.''

Seasonal Solutions chief executive Helen Axby said there had been, and still was, a shortage of staff for thinning work during the past few weeks.

Harvesting of early varieties of cherries was starting this week, which was about 10 days earlier than normal.

''We are hearing very positive stories across the board [about the crops] and we have fingers crossed for a boom season,'' she said.

However, it was not until the fruit was in the packhouses that they could say for sure how good the crops had been.

It was too early to judge how many staff would be required or what numbers of backpackers and students were going to be needed.

''Generally, we don't start to get a significant number of people coming for work until early December

''We can't really quantify what is going to be needed. And the real peak season could be before Christmas rather than after, this year.''

Seasonal Solutions staff had been attending employment fairs at the polytechs and universities to encourage more students to sign up for holiday jobs in the orchards.

''Working on orchards is a good opportunity to make decent money in a short space of time and working hard is the key,'' she said.

''We will also make sure any Kiwi who wants to work has first dibs on any jobs available.''

She said the orchardists were making sure they had camping sites or accommodation available for their workers.