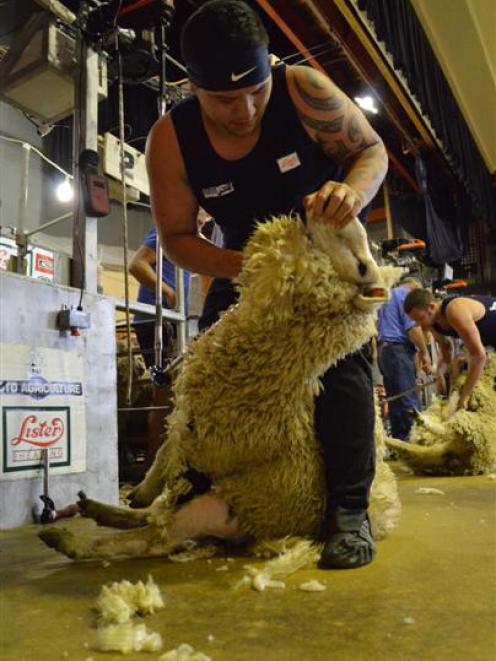 Brett Roberts enjoys the challenge of shearing. Photo from ODT files.
Brett Roberts was destined to a shearer.

Not only does his grandfather, Cliff Waihape, have a shearing contracting business based in Mataura, but four of his uncles, Chad, Chop, Cliff jun and Cody, are also shearers.

Mr Roberts (20) started shearing at a young age, while still at school in Menzies College, Wyndham, with his family members showing him the ropes.

When it came to a career, shearing was the ''first option'' and he started fulltime after leaving school in year 12.

For the past three years, he has been travelling to Australia ''on and off'' and shearing. Mr Roberts also hoped to do some shearing in the United Kingdom for a change of scene.

He enjoyed the challenge of shearing, particularly the ''toughness'' that was required to succeed in the field.

Working for his grandfather, the shearing run extended throughout Eastern Southland and into areas like Garston and Lumsden in Northern Southland.

While it was a large patch, sheep numbers were declining with the growth of the dairy industry - he estimated about 15,000 sheep in the past two years had been lost to their shearing run - but there were still enough sheep to keep them ''busy enough''.

Shearing was a hard occupation and while he acknowledged it was a little testing to begin with, his body seemed to have got used to it, he said.

Mr Roberts has been shearing competitively for the past few years, having been ''hooked'' by going to watch his uncles, who were all competitive shearers.

He thought he would like to have a crack at it one day and modestly said he had ''ended up doing all right''.

His biggest achievement was winning the senior title at the Golden Shears this year, having been a finalist in the previous year and the junior winner in 2010.

In the senior final this year, his main opposition was Masterton-based Riverton shearer Casey Bailey, who at one stage had won nine consecutive North Island senior finals during the season-long build-up to the Golden Shears.

Mr Bailey was first to finish, beating Mr Roberts' time by just over 11 seconds, but the young southern shearer had better shearing quality points. Winning, he acknowledged, was a ''pretty big achievement''.

Having come off the back of a few wins in the South, there was a little bit of pressure on him, but he attributed his success to ''just wanting it a bit more''.

This year, he also completed a sequence of wins in five consecutive years through the junior to senior grades at the Otago championships in Balclutha.

His grandparents were at the Golden Shears and they were ''pretty stoked'' with the result, Mr Roberts said.

Mr Roberts used his daily work as practice for competitions, so that it came naturally when he was at a show.

While some shearers just wanted to be the fastest, he took pride in his work, he said.

From October through to December, most weekends were spent at shearing competitions.

Next year, he will step up to the open grade and he will be trying to make the open final at Golden Shears.

He realised it would be tough, but just being there and ''up there with the best'' would be quite a thrill, he said.

He admired the likes of shearing legends David Fagan and John Kirkpatrick.

''They are good people, off the board and on the board ... and they help out anyone if you ask.''

Mr Roberts was keen to help other young aspiring shearers, either with competition shearing or just shed shearing.