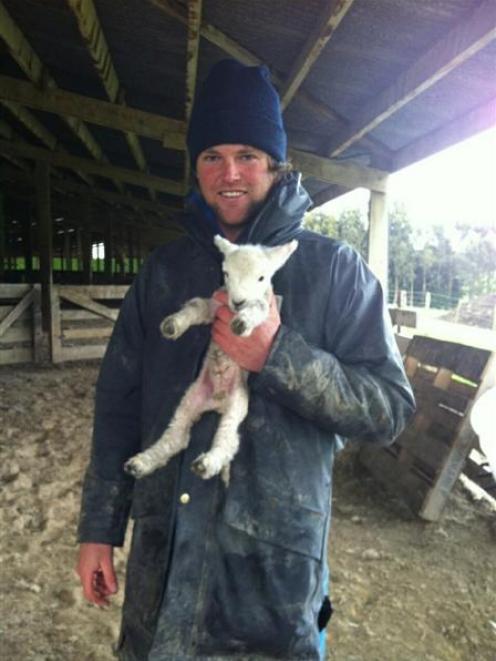 Clinton Young Farmers Club president Andy Wells believes the skills he has learned through his involvement with the organisation will help him in the future. Photo supplied.
When Cantabrian Andy Wells (28) moved south to farm near Clinton, he thought joining Young Farmers might be a good way to meet people.

Not only had he since made ''a hell of a lot of friends'' but he had also made a lot of useful connections.

The skills he gained through his involvement with the organisation would also stand him in good stead in the future, when he hoped to take on other roles in the agricultural sector. After studying environmental management at Lincoln University, Mr Wells headed overseas with a friend.

He worked on farms in England, including a cropping property and a turkey farm which produced birds for the Christmas market.

On his return, Mr Wells worked in town planning for a year in Christchurch but found he did not particularly enjoy being stuck in an office.

While he was overseas, his parents bought a farm near Clinton, and he joined them about five years ago. A second farm was added a year ago, running sheep and beef.

He said he loved farming, as it was a good challenge and he believed the red meat industry had a positive future.

He liked what both the Southern-based co-operatives, Silver Fern Farms and Alliance Group, were doing, targeting niche markets and higher value cuts, rather than it being a commodity product.

As the world population grew, the world was going to need more meat, he said.

Mr Wells got involved with Clinton Young Farmers when he first moved south, as he did not know anyone.

A knee injury meant he could not play sport so he thought Young Farmers would be a good way to get to know people.

The Clinton club struggled for a while, in terms of numbers and it also used to be quite male-dominated. But both those factors had since changed; club meetings usually attracted more than 30, there were a lot more females involved, and also a ''real range'' of people.

''It's not just farmers. There's accountants, teachers, builders - it's more a young person's club than a young farmers' club,'' he said.

The best part was meeting like-minded people while having fun at the same time. The club

They had tried hard to ''jazz up'' meetings, with various initiatives including fancy dress and also events like the Come Dine With Me TV programme.

Mr Wells is now in his second year as president of the club. Meetings were fairly casual but they tried to stick with correct meeting procedure and that had been good to learn, he said.

''They were wild all right. It was great fun and no-one got injured,'' he said.

Following a very successful ball, attended by about 280 people, the club has decided to create a scholarship, worth $1000 a year, to further higher learning and leadership in the Clinton and wider Clutha districts.

It was not necessarily for someone going to university or tertiary study, but for someone who was very deserving. Applications close on October 30.

Mr Wells hopes to use the skills he had learned at Young Farmers in the future.

While he was unsure whether it would be on a board or with the likes of Federated Farmers, his involvement with Young Farmers had proved very useful, including learning how to deal with different types of people, he said.