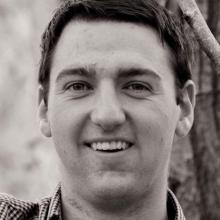 Wililam Benson.
The pair have completed their studies at Telford, where they were involved in the Red Meat Network, a tertiary network designed to increase the number of high achieving graduates entering the sheep and beef industry. Established last year, the network allowed 20 leading students from six tertiary institutions to hear high calibre speakers from the red meat sector, including New Zealand Special Agricultural Trade Envoy Mike Petersen. It was funded by the Red Meat Profit Partnership, a Primary Growth Partnership programme.

"We do this by showcasing a range of pathways for them to take by bringing in inspiring and diverse speakers," Mr Smith said.

Lisa Bonenkamp (19) grew up on a dairy farm in Waikato and always had a passion for farming. Telford campus of Lincoln University was mentioned by an agriculture teacher at secondary school and she headed south to tackle a certificate and diploma in agriculture. While she enjoyed dairy farming, it was "just too repetitive" for her and she was looking forward to her new job at Waikaka Station at Greenvale, near Gore. One of her favourite speakers through the Red Meat Network was Lone Star Farms owner Tom Sturgess.

"He was really good about putting yourself out there and doing as many things as you can. It [the network] was really good for meeting new people and networking and just seeing it’s not so hard to get where you want to go. It’s just about breaking everything down," she said.

Short term, her goal was to work her way up gradually — "give everything a go" and do her best at everything. Long term, she wanted to own a farm. William Benson (18) came from Northland, where his father was a natural horsemanship trainer. He had worked on a dairy farm part-time which whetted his interest in a farming career and he completed a certificate of agriculture at Telford last year and returned to do the diploma course this year. He discovered an interest in deer farming and starts work today on a deer farm at Clinton. He got ‘‘a lot out of’’ being part of the network, with the key messages for him on travel, setting goals and not being afraid to try new things.

"It was very useful to have advice from people that have been there, done that," he said.

The RMPP worked closely with New Zealand Young Farmers, which co-ordinated the network, and was seeking to increase the number of training providers and students involved in 2017. At present, it operated at Otago, Lincoln, Massey and Waikato universities, Telford, and Otiwhiti Station Land Based Training School.