'Grand' career, but concerns for future 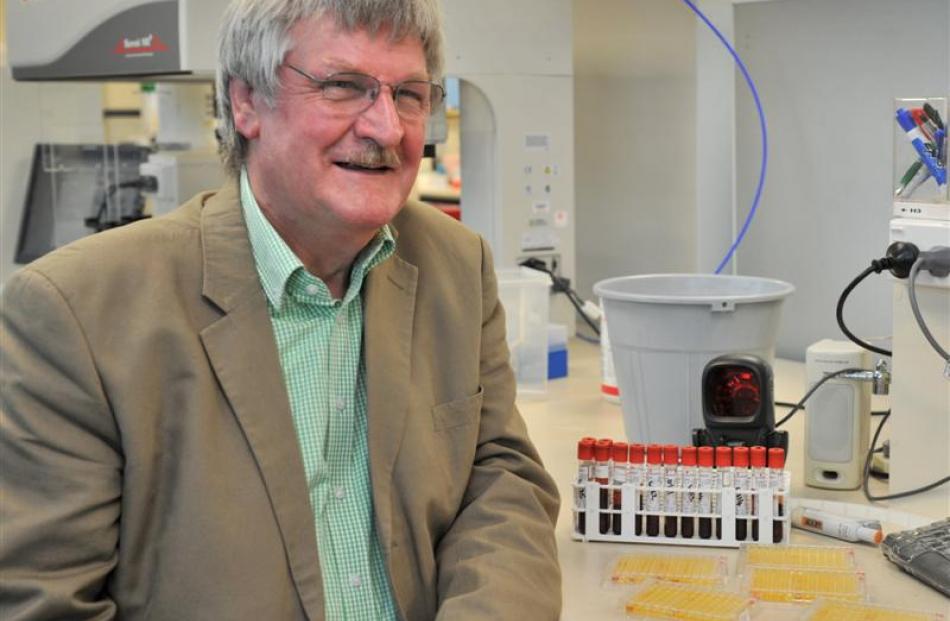 Prof Frank Griffin has enjoyed his career in animal science but has concerns that more investment is needed in the field of animal health. Photo by Jane Dawber.

Professor Frank Griffin sums up his lengthy career in animal science with a simple comment - "it's grand".

For three decades, Prof Griffin has led a University of Otago-based research team devoted to solving animal health problems in the deer industry.

That work has included developing diagnostic tests for the detection of two major bacterial diseases of New Zealand deer - bovine tuberculosis and Johne's disease - and a vaccine for the prevention of yersiniosis.

Widely respected in the industry, he was recently one of 11 researchers and scholars elected as Fellows of the Royal Society of New Zealand.

Such an honour meant he had peer acceptance and that meant a lot to him, he said.

And when the end of his career eventually came, the one thing he hoped for was the respect of those people he respected, he said.

The deer industry, with which Prof Griffin has had such a long involvement, welcomed the fellowship.

Deer Industry New Zealand producer manager Tony Pearse said it recognised Prof Griffin's substantial commitment to the industry and the challenges associated with both Tb and Johne's disease in deer over three decades.

Those in the industry had enjoyed Prof Griffin's enthusiasm and passion and his sharing of science, knowledge and services.

"It's been a productive association that's positively shaped this aspect of deer farming," Mr Pearse said.

Irish-born Prof Griffin did his primary degree in microbiology then his PhD in reproductive immunology.

He wanted to go to a "new world society" but he did not want to go to the likes of the United States or Australia.

New Zealand or Canada seemed more friendly and receptive for the young scientist.

There were job offers in both Australia and New Zealand - he could have ended up an animal researcher in Townsville - but he arrived in Dunedin in 1973 and started work at the university as an immunology lecturer.

At first, he researched pregnancy complications in women but later focused his attention on animals.

His involvement in the deer industry began following a trip to Queenstown where he met up with former All Black Duncan Robertson who had just got some deer.

The first challenge was to examine how post-capture stress could be managed. It was quickly established that to get deer to survive, the solution was not to get them eating but to get them drinking.

Then other issues were identified - Tb was a big problem and it was suggested it might be the disease that prevented deer farming development, he recalled.

The issue at that stage was to find a test, other than a skin test, for Tb diagnosis.

Prof Griffin led a group at the university which developed a series of diagnostic tests that were more sensitive and specific than the skin test used at the time to screen the deer population.

The resulting diagnostic tests have been available for deer farmers since 1990 when they were formally incorporated into the national control scheme for tuberculosis administered by the then Maf and the Animal Health Board (now the National Pest Management Strategy).

The Griffin test was able to detect those high-risk deer that were so heavily infected they were anergic to subtle skin tests and were diagnosed skin-test negative but, in reality, were the major sources of Tb infection and a threat to the health of the herd.

The identification and removal of those key animals was partly responsible for the major progress in reducing bovine Tb threats to the New Zealand farmed deer herd, the deer industry said.

In collaboration with Drs Colin Mackintosh and Bryce Buddle from AgResearch, a vaccine was developed to protect vulnerable young deer from yersinia infection.

The commercialisation of that vaccine had eliminated the disease as a major economic constraint to production for deer farmers.

And for Johne's disease, the development of a series of antibody tests meant infected animals could be identified and culled early, removing the major source of new infection from the herd.

Prof Griffin said the deer industry was special because, all over the world, enterprising people had been recruited to work in it.

He had met some "incredible good people", he loved working at the university and it had been "good fun".

But he also had some concerns about the future.

While he believed animal health and infectious disease remained the single most important arbiter of farm profit in the future, he was concerned that within three years there might not be scientists working on animal health in New Zealand.

There had never been a time when there was a greater need for investment in animal health.

People were more preoccupied by volume, rather than quality, and nobody was concerned about the health and integrity of the productive unit.

"We've lost focus a little bit in the sense we've just taken our eye off the ball," he said.

New Zealand had a long history of having "incredible investment" in the primary sector but he felt that had changed to market-driven initiatives.

"I'm very excited about New Zealand and what it can do but very frustrated with the way the globe has turned," he said.

In the past decade, Prof Griffin said he had probably had four of the best PhD students he had ever had.