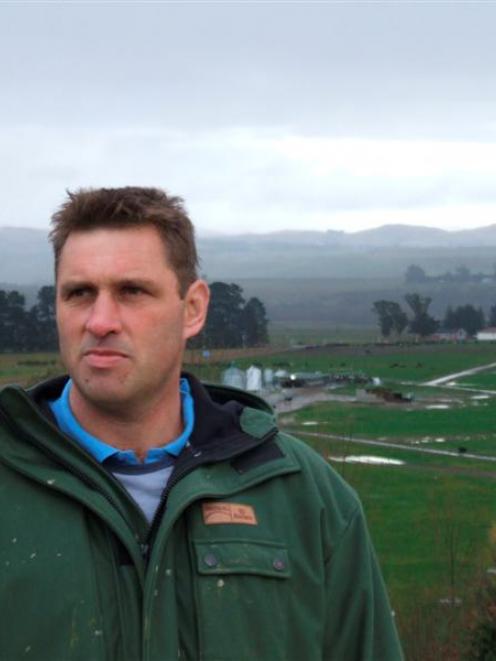 North Otago dairy farmer Robert Borst is worried about the effects of the Otago Regional Council's water plan on his farming operation. Photo by Sally Rae.
Hearings will be held early next month on the Otago Regional Council's proposed water quality plan changes. Agribusiness reporter Sally Rae talks to a North Otago dairy farmer, who says the changes will put him out of business, and to the ORC for the reasons behind its plans.

The ramifications of regulations in plan change 6A of the Otago Regional Council's water plan, as they stand, will put his farming operation out of business, he believes.

Casting the net wider, 28 families are supported by the Borst farming operation, which is based at Five Forks, inland from Oamaru.

Unless the plan was changed, jobs on the three dairy farms, which have 3600 cows, would go, he said.

There were other farmers affected in the area too - 26 farmers or farming businesses with land on top of the Kakanui-Kauru aquifer, deemed to be a "more sensitive" area and with a proposed limit of 10kg of nitrogen per hectare of land per year, on average, going into groundwater.

For Mr Borst, that ruling was the problem. On his properties, meeting that 10kg limit was "impossible" under a dairying regime, he said.

At the moment, it was in the high 30s, which he said was "about average" for stony soils and a dairy system.

Other areas affected by that limit included the Shag alluvium aquifer, Taieri aquifer recharge zone, Ettrick and Roxburgh aquifers and the aquifers around Lakes Wakatipu, Wanaka and Hawea.

And now the ORC had admitted an "internal error" was made with a map and "essentially" the North Otago volcanic aquifer was left off, policy director Fraser McRae confirmed yesterday.

While Mr McRae was unable to say how many farmers that affected, a "significant slab" of country inland from Oamaru could also come under the 10kg limit regime, he said.

That would be addressed later in a plan change, which would have to go through public notification, he said.

It was understood two lines on a computer failed to join up and the council was "very disappointed" about the error.

"We desperately try to get everything right. It's disappointing when a map doesn't come up the way we intended."

Mr Borst, who has 580ha of land in the sensitive groundwater zone, said the council had shown how "far removed" it was from understanding farming, from the error in the zoning to the timing of the hearings on the plan.

Hearings were planned for early September on an issue that would affect a "huge" number of people, yet this was during the busiest period on the farming calendar, calving and lambing increasing workloads.

There was concern many farmers would not be able to put the time and energy into fighting for what was very important, he said.

North Otago Federated Farmers president Richard Strowger agreed, saying it was one of the wettest springs during calving and lambing in the area.

Farmers were working 18-hour days and he questioned how they would have time to prepare for the hearings.

Mr Borst said the map mistake meant other farmers were now realising their farming businesses were in jeopardy and they were frustrated at having missed the opportunity to submit during the forthcoming hearing process.

While they had been told they had an opportunity to defend it, once a precedent had been set in his area, it would be very hard to change, he said.

"So we've got a small group of farmers here fighting quite a major issue, with another group of farmers that are sitting on the outside knowing they are going to have to face the same thing but are not able to be included in this process."

Mr Strowger said it had taken pressure from Federated Farmers to get the ORC to admit the mistake and inform those affected. The ramifications were "huge".

Mr Borst believed there was a lack of understanding of the implications for farming businesses as a result of what the council was trying to impose, and it was "hellbent on bulldozing along".

"The harsh reality is, unless I get this overturned, all these people [his staff] and the whole farming business is finished. That's what we're fighting."

"I've heard ... they don't want to personalise it. That really hurts - when it is personal. This is affecting a heap of families and farmers.

"It is bloody personal and they [the ORC] are the only ones that can actually have any sort of influence in changing things.

The way it was heading, there would be pristine water in the Kakanui Valley but no-one living there, he said.

He had tried to find out how the council had come up with the 10kg limit and it seemed to be based on assumptions and modelling, whereas he would have thought science could be used, Mr Borst said.

He needed to find out what he needed to do to maintain water quality on his farm, "but let's base it on science rather than assumptions or modelling", he said.

Mr Borst had approached the ORC and wanted to put in some groundwater bores to start testing groundwater to see what part of his farming operation he could change.

He hoped the ORC would invest some money and do some proper science, instead of going through the submissions process and potentially the Environment Court, and adopt a collaborative approach, bringing together other stakeholders, he said.

"People will always say ... 'let's blame dairy farmers for any water pollution'. But how do we know it's actually our dairy system?

"We're always improving; that's what farming is all about. A lot of that's based on science and research."

The Kakanui River was in "good heart" and he wanted it maintained that way.

"The last thing I want it to do is deteriorate. So let's work together on this and look at what part of our farming system, if there is one, that we can improve on."

He said he was frustrated by unsuccessful attempts to have meetings with Mr McRae and explain to him the ramifications "of what they want me to do".

Mr Borst, who moved to Five Forks in 1997, said there was a grim prospect of starting again.

"That's how frightening it is.

"There's some people down there that don't have an understanding and yet they are jeopardising whole careers and families and are not even prepared to meet. At least they could get an understanding. That's ... how removed they are."

Mr Strowger urged the ORC to start working with farmers to measure the effects of nitrogen.

"It's that lack of wanting to communicate or understanding ... that's really hard," he said.

What the council considered to be consultation, and what he considered it to be were "a little bit different", he said.

When contacted yesterday, Mr McRae said the council was fully aware of the impacts of the plan change on the farming community and, in some areas, where the environment was more sensitive, that the necessity for change, if groundwater quality was to be maintained, was significant for some.

That was what the Resource Management Act process was about. It was a public process in which commissioners were appointed to hear submitters' concerns, and which concluded with a decision being made.

While Mr McRae was not going to get involved in a "private battle", he said Mr Borst had had many discussions "with a lot of staff from this organisation".

The council had a long programme of community discussions and workshops in relation to the plan change.

In response to Mr Borst's suggestion that the 10kg figure was based on modelling and assumptions, he said modelling was science in action.

Mr Borst wanted to be able to measure what came off his farm, farming the way he wanted to farm. That was clearly not going to enable the improvements in water quality the community and Government expected, Mr McRae said.

The council had been using the consultative process and talking about the plan change "for well over 18 months". Anyone who had been listening to what was being done would have been testing by now, he said.

It expected regional councils to move quickly to implement mechanisms and changes to plans to ensure water quality was improved. That would "rub hard" in some parts of the community, Mr McRae said.

While dairying was at the "extreme front end" of that process, that was not to say other farming sectors were "not as bad in places" as dairying.

The approach the ORC had taken was to address the quality of water coming off the land, rather than controlling what people did on the land.

The timing of the hearing period was just a product of time the process had taken, he said.

While he accepted it was a busy time, it was simply the next step in the process, he said.

The plan was all about improving water quality and giving farmers the opportunities to alter their land management the way "they best see fit, rather than us dictate to them how they will manage their farm".