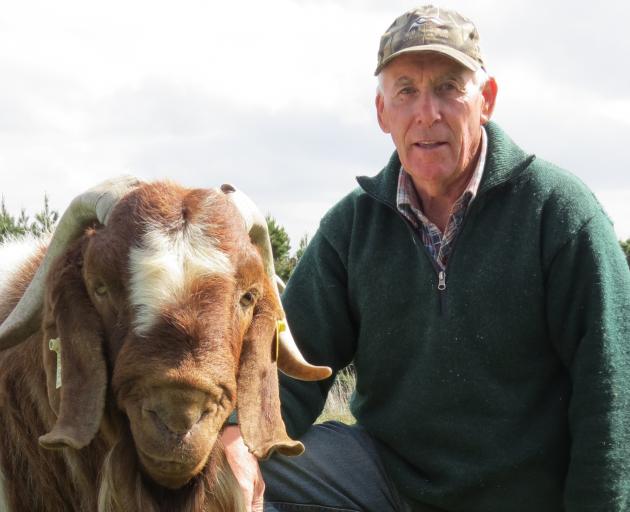 Owen Booth, of Milton, says goat farmers and breeders are often received inquiries from potential overseas buyers. Photo: Southern Rural Life.
There is a huge demand for Boer goats and goat meat from buyers overseas, but New Zealand growers do not have the population to meet a potentially lucrative export market.

Stud breeder and New Zealand Boer Goat Breeders Association executive member Owen Booth, of Milton, said he had recently sent two Boer stud goats to a quarantine farm in the North Island to join another 20 or 30 to await transport to Argentina.

He and other goat farmers and breeders had often received queries from potential overseas buyers.

"In the last 12 months I have had inquiries from Australia, Taiwan, Canada and Korea," Mr Booth said.

"We are continuing to get more now than we ever did."

He said goats had been also sent to Nepal and New Caledonia in the past year.

There was a huge demand world-wide for goat meat, as well as for stud animals as breeders tried to improve their flocks.

"The person from Korea wanted to buy a couple of 40ft containers each month of goat meat.

"Every Boer goat breeder got that email and, for most, it is a waste of time as there is so much meat required and we haven’t got that volume."

He said he might negotiate with a potential buyer for two or three months, and then not hear from them again after they eventually did their homework and realised the costs involved.

"Freight costs are huge and there is usually a protocol and a 30-day quarantine period."

When he imported 16 animals from Australia a few years ago, it cost him about $20,000.One of the key factors to be able to meet overseas demand is the need to encourage more New Zealand farmers to look at farming goats.

"We have got to get the meat value up so farmers will want to farm goats.‘‘We have been working hard to try to make that happen. ‘‘I believe there is potential there; it is just we haven’t got the numbers."