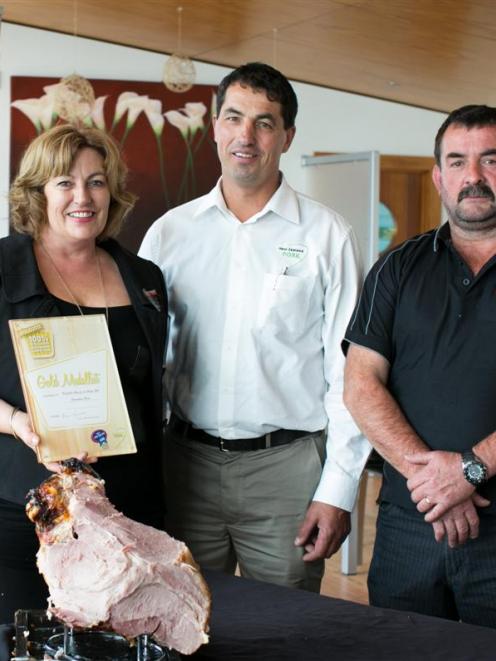 Mrs Morton and her husband Gus, from Waitaki Bacon and Ham, won the gold award for their Hampshire Champagne sliced ham in the recent competition.

Retail meat industry specialist Matt Grimes, who has been a judge since the competition's inception in 2008, described the entry as a ''standout''.

''This was a divine sliced ham. It had a nice, even degree of moisture and a lovely aftertaste. The colour was also nice and even, which reflects its fresh home-made quality,'' he said.

The Mortons have been raising pork on their North Otago farm for the past 32 years, launching their brand in 2007.

It was hard work being a pig farmer, particularly in the current environment, and it was ''so exciting'' to be acknowledged for that work, Mrs Morton said.

She was particularly thrilled for her husband, who put so much hard work in ensuring the pigs were farmed well with the right husbandry and nutrition.

''We know we've nailed it in that sense,''she said.

The couple had spent the past couple of years looking at how best to situate their brand. Winning the award was the ''icing on the cake'' and showed the business was heading in the right direction.

They were boutique farmers, who sold their products both online and also at farmers markets. They were focused on quality rather than quantity.

''One message that should come out of this is buy New Zealand grown, buy local. Ask wherever you go, what you're eating and, if its imported, don't go there,'' she said.

Presenting the prize, New Zealand Pork chairman Ian Carter, who also farms pigs in North Otago, said the result highlighted the importance of the partnership between farmers and processors to produce ''the best ham in the land''.

Pokeno Bacon, from Pukekohe, also won gold out of the 31 other entries in the sliced ham category.