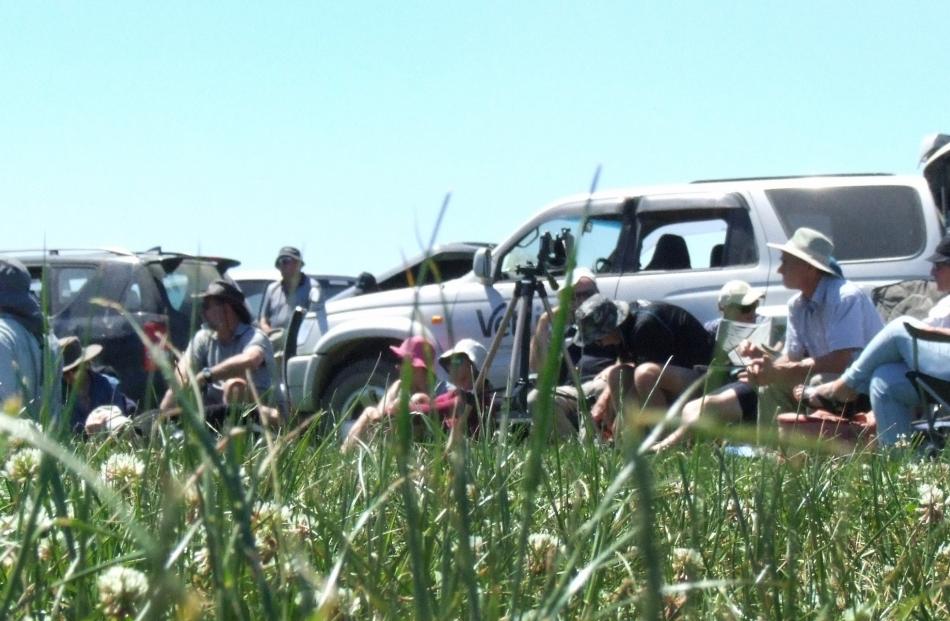 Attendees listen to speakers at a field day at Matakanui Station in a paddock showing the benefits of irrigation. Photos: Sally Rae 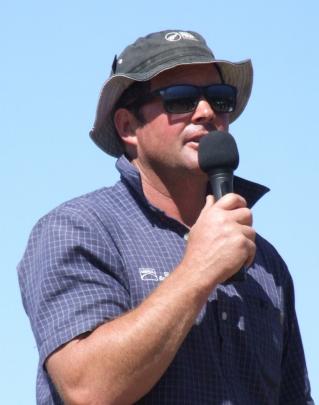 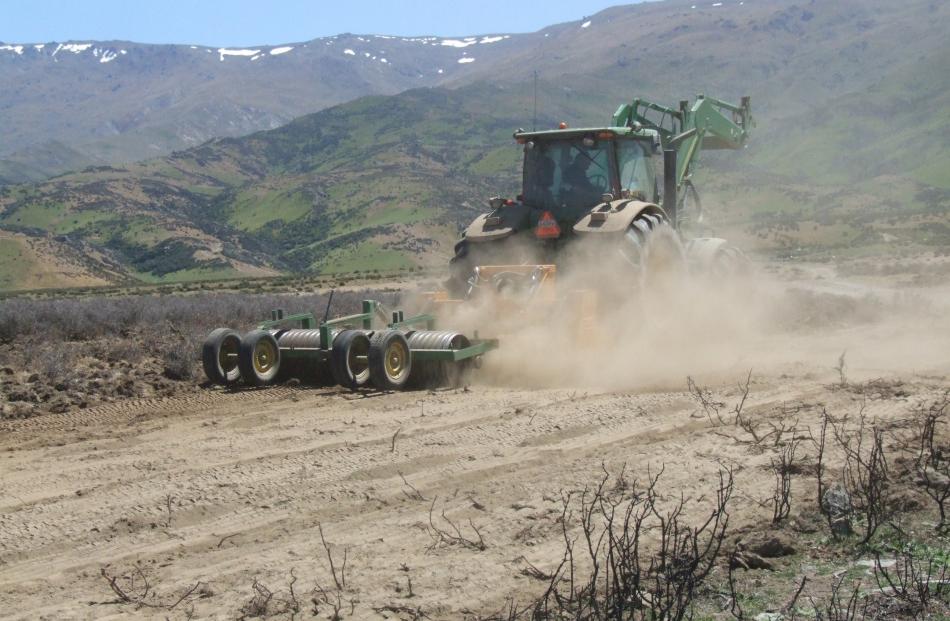 Next year will mark the 60th anniversary of Paterson family ownership of Matakanui Station, near Omakau.

It is a markedly different property to the vast 32,000ha property for which a depasturing licence was issued to Richard Anthony Filleul in September 1859.

Matakanui Station now comprises 8700ha, ranging from 280m to 1600m on the Dunstan Mountains, and part of the landscape has been transformed with the introduction of irrigation.

After a variety of owners since it was first settled and subsequent subdivisions of land, the property was bought by Jim Paterson in 1958 for £100,000  — the first property in Otago to reach that milestone.

In 1968, it was taken over by Jim’s son Martin and his wife, Hilary, and it is now owned and farmed by their son Andrew and his wife, Tracy, with the help of four full-time staff and casual workers during peak times.

Andrew and Tracy Paterson, who run about 19,200 sheep and about 850 head of Hereford cattle, saw the future for Matakanui revolving around long-term contracts.

They recently signed a 10-year contract with Icebreaker, through the New Zealand Merino Company, and the plan is to increase stock numbers to fill Icebreaker, SmartWool and Silere contracts.

With income increasing through that, it will allow further development to be done on the property.

Dr Mark Ferguson, from the New Zealand Merino Company, explains estimated breeding values in the ram-selling shed. Photo: Sally Rae
The hill was the "engine room" of the property; that was what made the property summer-safe, Mr Paterson said. There seemed to be about twice as much rain on the hill than on the flat. Large-scale irrigation development on Matakanui began in 2015 with close to 10km of pipe laid for gravity-fed pivot irrigation. At present, there is 130ha under pivot, with more pivots proposed.

When they moved from flood irrigation or border dyking, they managed to irrigate four times the area with guns, and Mr Paterson estimated they had done at least half that again by going to pivots.

He was originally dubious about the merits of pivots versus guns but now, after seeing what was being grown under the pivots, there was "really no comparison" — and there was the added bonus of not having to shift them.

He was looking forward to getting rid of border dyke irrigation, saying it was the most inefficient irrigation on the farm.

Pivots meant changing the way they managed that irrigated country, which had become more intensive, and they were reaping rewards out of being able to put large numbers there. The intention was to replace as many guns with pivots as they could.

A group of farmers in the Chatto Creek catchment, including Mr Paterson, had formed a water management group and started monitoring water quality.

At Matakanui, he thought one of their issues would be with their flood and border-dyke irrigation and that had been confirmed. There was excellent water quality coming from the pivot and gun irrigation.

Pivot irrigation has made a change to the landscape at Matakanui Station. Photo: Sally Rae
There was a history of footrot on the property but, once they started to deal with the issue,  Mr Paterson had confidence to start putting large numbers of lambs under the irrigation, happy that they would not "fall to pieces".

Breeding fine-wool sheep was in the Paterson family’s blood and they produced high-quality wool.

Latterly, more emphasis had been put on the meat aspect — breeding meatier animals and ones that finished earlier.

Historically, Matakanui ran Romney/merino halfbreds but in 1952, under previous ownership, it was changed to Lincoln/merinos with subsequent increases in lambing and wool weights. Today the majority of ewes go to Polwarth rams.

Performance recording began in 1979 when Hilary Paterson recorded the Polwarth stud by hand, diligently recording families and traits.Historically, Martin and Hilary went to Australia to buy rams for the stud. In 1996, the couple were offered the opportunity to purchase the Rockthorpe Polwarth stud in Tasmania.

Martin and Andrew selected 327 ewes and 19 rams, which, after quarantine and tests to meet import regulations, were flown to Christchurch in specially made crates.

Mr Paterson believed the Polwarth was in a "prime spot" at the moment, with good money for wool and also for lambs and hoggets.

At the recent Canterbury A&P Show in Christchurch, there was a lot of interest in Matakanui’s rams, which showed that people were "coming around to our type of sheep".

The sheep did well on Matakanui, which could be a "pretty tough" property at times. It could get very cold, they also had to deal with very dry conditions, and it could also get wetter.

Information was recorded against every animal’s electronic identification (EID) attached to its ear.

They have embraced the use of estimated breeding values (EBVs) to assist them and their ram clients with selection. They sell between about 200 and 250 rams each year.

New Zealand Merino’s production science team, led by Dr Mark Ferguson, has been trying to develop an estimated breeding value for footrot, in collaboration with breeders like the Patersons.

It was a pretty critical time in the fine-wool industry to have such a tool, as it would give the opportunity to move fine-wool sheep into different areas and produce fine wool that was significantly more valuable than strong wool, Dr Ferguson said.

It was also about using genetics to find sires to take work out of production systems, such as footrotting. There was "massive potential" remaining in the industry through genetics, he said.

Tracy Paterson spoke of taking part in the Agri-Women’s Development Trust’s Understanding Your Farming Business course, which she described as "really fantastic".

While she did not do a lot on-farm, she was always in the office. It had given her so many ideas as to where she could add value to the business without interfering with day-to-day operations.

It enabled her to come home and start a conversation with her husband, largely because of what she had learnt on the course.

Mrs Paterson stressed the need for everyone in the business to be involved in it — partners, staff and external parties such as meat and wool companies, bank managers and accountants.

"All these people, without them your business isn’t going to work," she said.

Among the visitors at the field day were Gunter and Sabine Bagowski, from Hamburg, who were being hosted by Alliance Group director Dawn Sangster and her husband, David.

Their Hamburg-based business, Prime Meat, has had a long-established relationship with Alliance Group, buying lamb and venison from the company.

The couple came to New Zealand most years and Mr Bagowski said the environment in which the livestock was farmed was special and unique. They only imported meat from New Zealand.

The couple were in New Zealand for three weeks and were visiting Alliance Group plants and hearing about what was going on.

They recently had a stand at the Anuga trade fair — cited as the world’s largest trade fair for food and beverage — in Germany.

They used a Berlin-based New Zealand chef to cook product on their stand, obtaining his services through Beef + Lamb New Zealand and Deer Industry New Zealand.