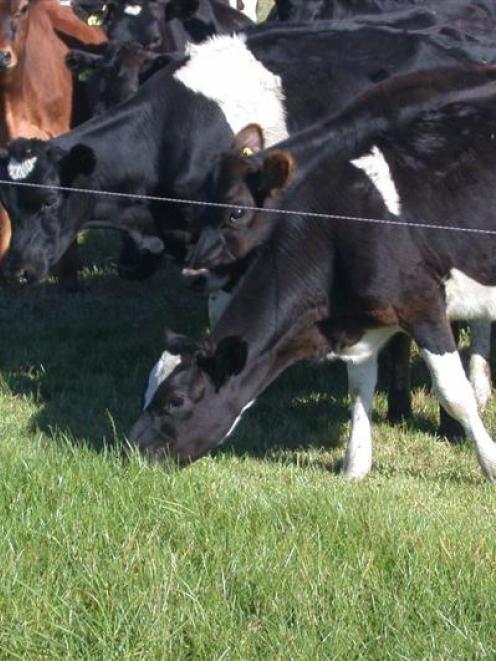 The Hawea Flat farmer lives in the real world, where servicing a substantial mortgage on his 690ha Grandview property, getting a start in farming and still having a lifestyle, are priorities.

The result is that Mr Kane does not own an animal, does not require large capital outlay, but instead runs what, on the surface, appears to be as complex business of leasing out land for cropping, grazing dairy cows and dairy young stock.

"I perceive it as quite a simple farm," Mr Kane said.

"I am focused on finding the highest and best land use option to service my debt."

His is a story of a young man taking a different approach to getting settled on the land, and given his financial burden, he has to ensure his risk is kept as low as possible.

After a career as a dairy consulting officer and banker, Mr Kane (31) said two years ago his parents, Colin and Pam, told him and his three sisters they wanted to leave farming.

A purchase offer was on the table and if any of the children wanted, they could buy the farm at that price.

Mr Kane said it was a fair offer by his parents and he welcomed the fact it was commercially based, without favour to the family.

It also meant there was no emotional family tie to the farm, but when he sold some rental properties amd bought it, he had to change his thinking.

Mr Kane said when he committed to buying the farm, he realised the traditional practice of running merino sheep and deer would not generate sufficient cash.

He declined to reveal the size of his mortgage, but on taking over in April 2008, he immediately invested in an upgrade of his irrigation intake on the Clutha River and bought the first of seven irrigation centre pivots.

"I had a debt to service, so I had to get the centre pivots in quickly."

Being run as an extensive property meant paddocks were large in size, so installing the centre pivots did not require extensive fencing and earthworks.

Over the winter of 2008 the farm went from carrying 6000 stock units to the potential for 12,000, because of the irrigation.

Grandview already had 130ha of border dyke irrigation and another 30ha of K-line between the Tarras-Luggate road and the Clutha River, but Mr Kane's expansion added another 300ha above the road.

His plan was simple.

Provide irrigation and then go out and find people or businesses that needed the land and his skills, therefore reducing his exposure or risk.

An example was Mainland Poultry, which leases 240ha of irrigated land, on which it grows wheat and peas for its Waikouaiti poultry farm.

"They are responsible for sowing, fertiliser, spraying and harvesting. They tell me when to water and I get paid monthly."

"This, for me, is risk management, and it's almost like dairy farming, when I get the cheque each month."

This year the wheat crop - both spring- and autumn-sown - average yield was eight tonnes/ha and the peas six tonnes/ha.

Even his dairy grazing contracts are not straightforward.

Last winter he grazed 4000 cows for farmers from Omarama, Fox Glacier and Southland on 160ha of kale.

One farmer has 2200 cows and the contract means Mr Kane supplies the feed and accommodation for the farmer's three staff, who spend the winter caring for the cows.

The cow owner also supplies the tractor, silage wagon, motorcycle, fencing, staff and their expenses, and the day-to-day management of the cows.

"It means I don't have the capital outlay and staffing issues."

Mr Kane supplies the feed, including straw, which he buys from Mainland Poultry.

For the other two dairy farmers, Mr Kane arranges the winter management in what could be considered a more traditional contract.

Included in the dairy grazing are 500 young stock from the West Coast which are grown out at Grandview.

He harvests three cuts of grass off 100ha for silage, aiming for 500 tonnes of dry matter for dairy grazers, and has another 100ha for the young stock.

Mr Kane employs his father all year round, including helping to feed out to the dairy cows and shift breaks over winter.

Midlands Seeds also leases 24ha of irrigated land to grow specialist small seeds for the northern hemisphere market and, like Mainland Poultry, is responsible for sowing and harvesting and instructs Mr Kane when to turn the water on and off.

When he has spare feed, he has also grazed lambs under contract for meat companies.

Mr Kane said while he considered his system simple, any opportunity had to satisfy three criteria:It had to increase the financial performance of the business, free up time or make things simple, and it had to satisfy risk-for-reward standards.

"My passion is the whole business and how it fits together and how I make it all work to be sustainable both environmentally and financially."

His operating expenses were between 35% and 40% of gross farm income.

The Upper Clutha district was changing.

"Go back three years and Mainland Poultry hasn't leased land. Biodiesel - there was no such thing, and winter grazing cows up here were minimal."

The difference was water and the options it provided.

Water is pumped from the Clutha River to a large pond installed by Mr Kane's father.

The farm covers three terraces, and three pumps of sizes relative to the lift, push the water to three heights, from where it is fed to the centre pivots.

The system was working both financially and meeting his lifestyle goals, and he was adding value to the property.

It has also changed his approach to investments, adopting some of the rules he saw in the dairy industry, such as monitoring, measuring and timing.

With this in mind, he looks at the cost of feed, how to grow it at the cheapest cost relative to yield and he monitors soils moisture and fertility levels.

It all adds up to a sustainable and profitable business.