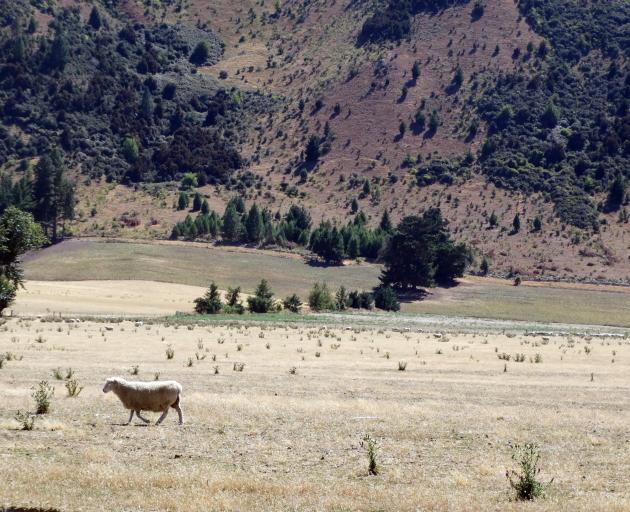 Sparse grazing opportunities are evident on Maungawera Valley Rd, near Albert Town, yesterday, one of the many pastures around Wanaka which have dried off in recent weeks. Photo: Sean Nugent
The public and businesses are being urged to take a long-term view of the drought affecting Otago and Southland, given the compounding factors being faced by all farmers.

The lack of water, rising irrigation costs, failed crops, diminished feed stocks and crop replacement are just some of the issues being faced by farmers in the months ahead, Otago Chamber of Commerce chief executive Dougal McGowan said, after a medium-scale adverse drought event was declared in parts of Otago and Southland yesterday.

''This drought is going to affect crops for some time yet, going into autumn and winter,'' he said, when contacted, yesterday.

''Support for farmers and primary producers is important ... including their mental and emotional health,'' he said.

Rain in the South is due to start from today, but Mr McGowan echoed sentiments of Federated Farmers that there was potential the moisture would wash off the hard-baked paddocks.

''If anyone has been fertilising, nutrients will be washed off into the rivers, which in turn isn't good for the rivers, either,'' he said.

Many Otago farms had been destocking sheep and cattle by sending them to the meat works earlier than usual, resulting in weekly record numbers of containers being readied for export, Mr McGowan said.

However, the destocking process meant farmers would have to rebuild flocks and herds over the next two years to get back to optimum numbers.

I'll certainly think of the long term sustainability of farmers when they can demonstrate that they care for their animals in heat and cold through good shelter, shade trees etc.