Looking ahead with Abacus Bio 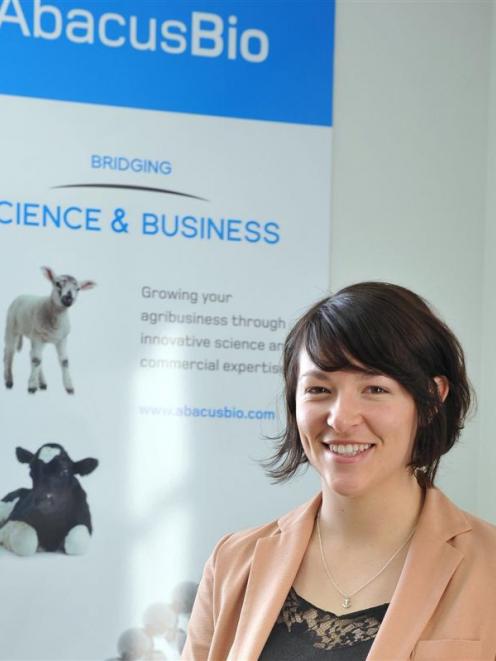 Associate consultant Grace Johnstone, at AbacusBio in Dunedin. Photo by Craig Baxter.
Since joining AbacusBio on an internship at the end of her university studies, Grace Johnstone admits she ''hasn't really looked back''.

After spending time last year travelling and working overseas, Ms Johnstone (24) returned to the consultancy and new venture development company this year as an associate consultant.

Brought up on a sheep and beef farm near Outram, the former Columba College head prefect graduated from the University of Otago in 2011 with a double bachelor's degree in science, majoring in genetics, and law.

When she went to university, she knew she definitely wanted to be involved in science, although she was initially leaning more towards medical science.

Genetics was a great topic to study as it was so broad and she also knew that she did not particularly want to end up working in a laboratory.

The law degree was useful - ''you develop a lot of skills in terms of writing and reading and putting arguments forward'' - and, for a while, she did consider working in patent law.

After completing her tertiary studies, Ms Johnstone joined AbacusBio for a few months through a Ministry of Science and Innovation funded internship.

She was mostly investigating nutritional aspects of lamb but also had exposure to other aspects of meat quality, labelling and market regulation and the DairyNZ review of the national breeding objective.

For part of her time overseas last year, she was based at Scotland's Rural College Roslyn campus, near Edinburgh.

She was involved with a project which examined the fatty acid profile of milk through the lactation cycle.

She enjoyed the experience, saying it was like a research university and quite different to working at AbacusBio, which was a close-knit environment.

She enjoyed the open, friendly work environment at AbacusBio and rejoined the company in February, as an associate consultant.

With staff coming from such diverse backgrounds, including some international colleagues, it was good to have different perspectives.

Since her return, Ms Johnstone's main project has been her involvement in the Alliance Group meat quality programme.

Earlier this year, Alliance Group and China's Grand Farm began developing a six-point blueprint known as Grand Alliance, which was designed to further increase business between the two companies.

That included launching a consumer research programme in China which would survey more than 200 Chinese consumers on the taste and quality of New Zealand lamb, compared to Chinese and Inner Mongolian lamb.

The survey will be conducted at the end of this month, followed by the analysis of the results.

It was a ''really exciting'' project to be part of, she said.