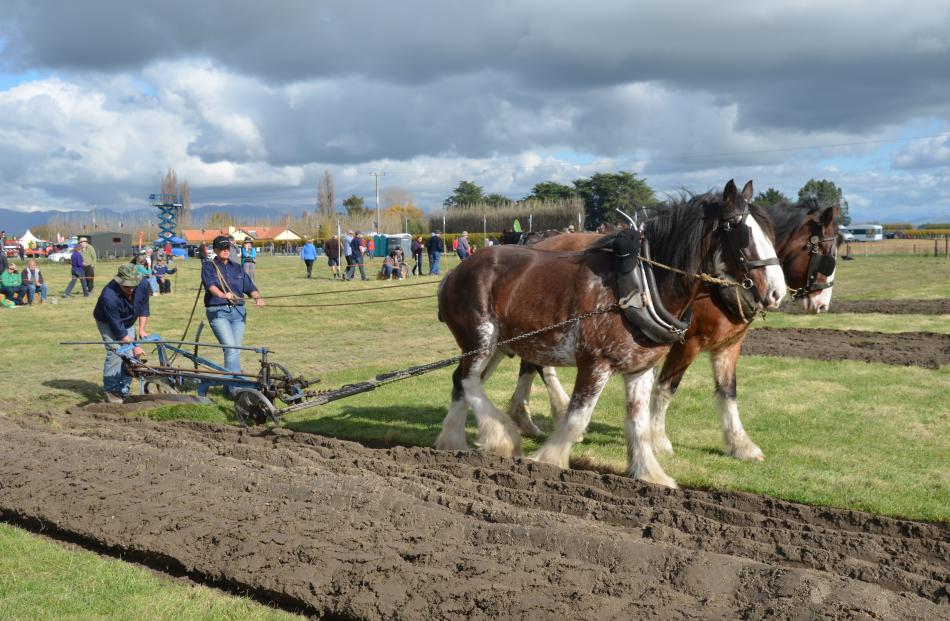 Sean Leslie and Kay Walker, of Middlemarch, were second in the Rural News Horse Plough category at the recent New Zealand Ploughing Championships at Spring Creek, near Blenheim. Photo by Noel Sheat

Hosted by the Marlborough Ploughing Association, more than 30 people took part in the national finals at Spring Creek, near Blenheim, from May 10 to 11.

The competitors were all winners from various qualifying events held throughout New Zealand in the past 12 months.

Mark Dillon, of Riversdale, was third in the Case IH silver plough section, and also won the W.G. Miller Trophy for the highest placed competitor aged under 35.

He also won the silver medallion for the grassland ploughing and the Magson trophy for placing third in the Case IH Silver Plough conventional class. Sean Leslie and Kay Walker, of Middlemarch, were second in the horse plough category.

''The weather was good and the ground conditions OK,'' he said.

He said the championships had a country fair feel, and in addition to the conventional, reversible, vintage and horse ploughing sections, there were displays of vintage tractors and machinery and arts and crafts stalls. The formal dinner was held at the Clubs of Marlborough.

''Mark is also one of our competitors to plough in the conventional class at the next World Ploughing Contest in Bordeaux, France, on September 6 and 7,'' Mr Sheat said.

Malcolm Taylor, of Putaruru, who will compete in France in the reversible class in September, and Ian Woolley, of Blenheim, will represent New Zealand at the World Ploughing Contest at Denmark in 2015.

The next New Zealand Championships will be held at Palmerston on April 18 and 19 next year.