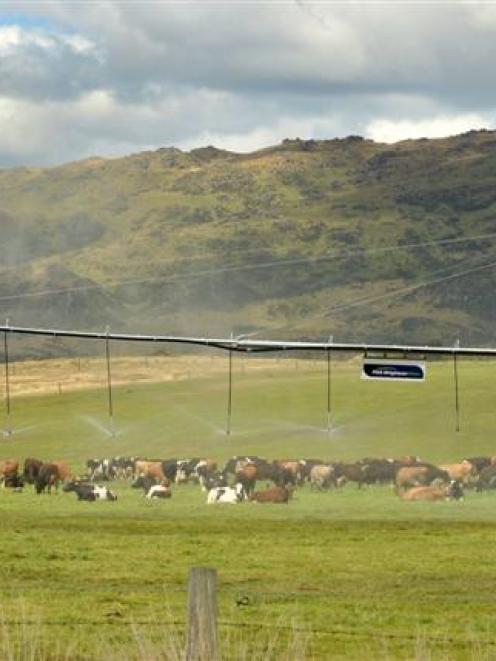 Irrigation has transformed large tracts of Maniototo farmland. Photo by Stephen Jaquiery.
Irrigation in the Maniototo is the ''lifeblood'' for the area it serves, says Maniototo Irrigation Company chairman Geoff Crutchley.

To mark the 30th anniversary of the scheme, a jubilee dinner is being held this Saturday, and a public picnic and gala day is being held at the Gimmerburn Domain on Sunday.

The scheme, the last of the large community irrigation schemes built by the Ministry of Works and Development, has a chequered history.

It was taken over by the landowners that year in a partially complete state, with the infrastructure in place for only about 40% of the area originally intended to be irrigated.

It demonstrated, in conclusive terms, the enormous costs imposed by government ownership and operation. To the long debated issue of whether government or farmers could better manage complex irrigation schemes, it provided an unequivocal answer - the farmers, he said.

Mr Crutchley's involvement began just before the scheme was commissioned, as a ''stirrer'', due to the high water charges proposed.

At a time when lambs were fetching only about $15, there were ''pretty scary numbers'' being touted.

He was among a group of four who succeeded in ''getting a reasonable deal'' and, following that, three of the four were elected on to the irrigation committee.

He had been there ever since. Changes in the Maniototo since the advent of irrigation had been ''massive''. Land had changed hands, there had been the expansion of the dairy industry, and also corporate investment. A dry year like this highlighted the importance of irrigation, he said.

As well as economic benefits, there were social benefits, including the company discharging ''a pretty useful'' amount of water in the Taieri River, which maintained a higher than natural low flow.

Jeff Cleugh, chairman of the West Side Irrigation Company, said his family's Gimmerburn farm had been a ''major beneficiary'' of the scheme, having had water for the three decades.

It had made a ''tremendous difference'' to their sheep and beef farming operation. As well as increasing the stocking rate and productivity, it provided ''much more security''.

''It meant we could be doing a better job of everything. It also made farming much more enjoyable and satisfying being able to grow enough grass to grow our stock and doing everything much better than we'd be able to do under a dryland system,'' Mr Cleugh said.

Irrigation did come with increased costs and workload but the ''huge benefit'' outweighed those factors, he said.

When it came to the impact on the surrounding district, it was very hard to quantify but it had to have made a ''huge difference'', he said.

He cited the likes of transport companies and the work it had created in terms of carting stock and fertiliser. Under the dryland system, and with such low rainfall, not much fertiliser was used. In turn, those companies spent money to get better equipment. Then there were the agricultural contractors, used to turn irrigated pasture into silage, and the labour that came in every summer to do that work.

The advent of dairying had also been a ''huge change'' to the area, with spin offs in terms of employment.

The Maniototo had been ''such a good scheme'' because the storage had been able to keep up with demand most years. The Herlihy family at Patearoa, who converted to dairy, now employed 12 people whereas, previously, it would have been two, Gavan Herlihy said.

Mr Herlihy described the scheme as ''the jewel in the crown'' of the Maniototo farming scene, which had enabled land to be transformed and allowed a lot of intensification and diversification. Ranfurly would ''only be a shell of itself now'' if it was not for the irrigation, he believed.

On the Herlihy farm, there had been 37mm of rain for the three months from November to the end of January. Without a water source, they would be in ''dire straits'', he said.