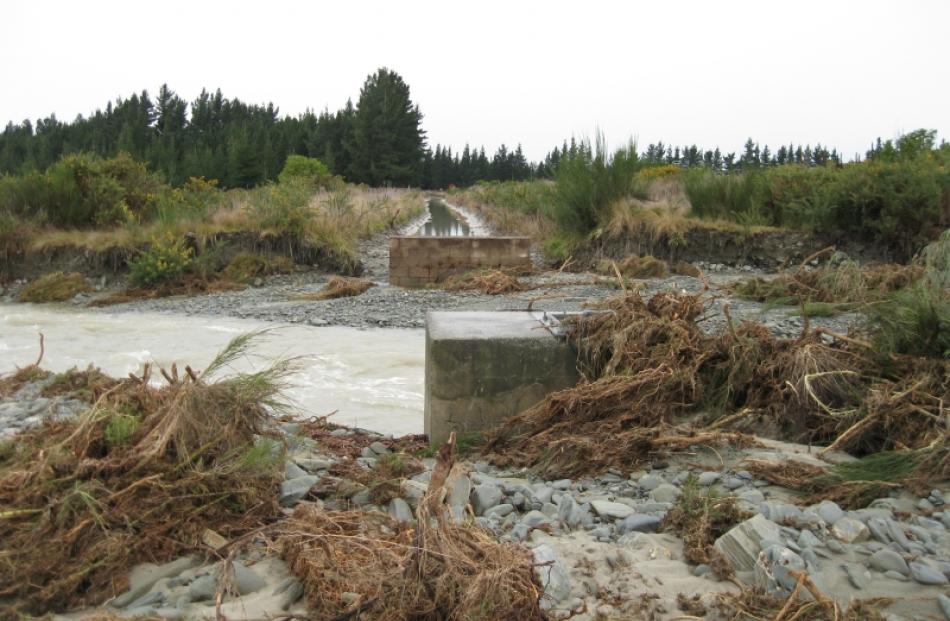 Repairs are under way after high river flows and flooding caused significant damage to irrigation schemes in the Waitaki river catchment, including this damage to the Kurow Duntroon Irrigation Company's tail wall on the Otiake River. Supplied photo.

Waitaki residents say the rain and flooding from the storm which lashed the country was the worst seen in decades.

The Danseys Pass bridge was destroyed after about 160mm of rain fell in the space of three days.

However, the planned extension to the scheme had been set back with the washing out of the newly-installed pipe at the Maerewhenua River near the Duntroon bridge.

It was not yet known how much repairs would cost and the company might look at other options now it was aware of the potential for this kind of damage, he said.

The damage would be covered by works insurance as the upgrade was not yet complete.

Repairs could take about a week ''if the river flows are on our side''.

''If there was any silver lining it was that it happened now and not during the irrigation season.''

The company considered itself ''lucky'' because there had been potential for further damage to the pipe system on the hills, he said.

The company, which irrigates land around Duntroon, began the $600,000 piped extension to its scheme in May and it is planned to have it up and running in time for the irrigation season in September.

Kurow Duntroon Irrigation Company operations manager Murray Turner said ''tens of thousands of dollars'' of damage had been done to its scheme.

Mr Turner said the Awakino and Otiake river siphons had washed out - the first time in the scheme's 40-plus-year history they had been damaged in this way.

The Otiake River head and tail walls had been ''severely damaged''.

There was also a lot of minor damage to the races.

Contractors were immediately called in to start work but the total cost was as yet unknown, Mr Turner said.

''We're just busy scrambling to get it ready for frost-fighting and spring irrigation.''

Mr Turner, who has lived in the area for the past 35 years said he did not remember flood waters travelling at ''such velocity'' before.

The scheme was insured for such damage, he said.

''Our system takes quite a lot of flood water.

''It does quite often suffer.

''I've never seen rain like it running off the paddocks. ''There were a few slumps and washouts but little to no damage.''

Although it was not encouraged, the irrigation scheme did help with general drainage of the area.

There was a small wash-out at one of the sea outlets but maintenance had been planned for that site, Mr Guyton said.

Irrigation New Zealand chief executive Andrew Curtis said to his knowledge schemes in Canterbury had not had any significant damage.