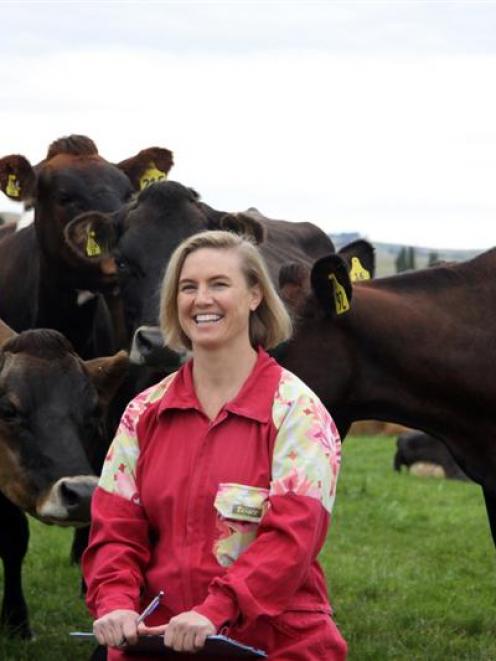 Ms Murphy, who is a finalist in the 2015 Dairy Woman of the Year competition, has forged a global career as a dairy nutritionist.

Originally from Canada, she worked in China before moving to New Zealand 11 years ago. She is based in Alexandra where she works for PGG Wrightson and is also on the committee for the New Zealand Association of Ruminant Nutritionists.

She was thrilled to be selected as one of four finalists in the Dairy Woman of the Year competition.

''You could have knocked me over with a feather. I am incredibly humbled to have even been considered to be in the running,'' she said.

Conducted by the Dairy Women's Network and sponsored by Fonterra, the award includes a 12-month scholarship to the Breakthrough Leaders Programme run by Global Women New Zealand, valued at $25,000.

Judges could not whittle the finalists down to three this year and it would be tough choosing the overall winner, Dairy Women's Network chief executive Zelda de Villiers said.

The winner will be announced at a gala dinner at the Dairy Women's Network annual conference in Invercargill on March 19.

Ms Murphy has a master's degree in ruminant nutrition and international development from the University of Guelph in Ontario.

She spent four years in Shanghai working on a dairy project. It had been an exciting time to be involved in the dairy industry in China and she also enjoyed the cultural aspect, she said.

She moved to Central Otago and had her own consulting business until 18 months ago when she was approached by PGG Wrightson to provide technical support throughout the country in the area of ruminant nutrition.

She could still to live in Alexandra where she ''thoroughly enjoyed'' the community and surrounding region, she said.

As she had two young sons, Nicholas (8) and Christopher (6), it was a juggling act between work and family but she was no different to any other working mother, she said.

She had a passion for what she did professionally, but becoming a mother was the ''best thing'' that had ever happened to her.

Although ''a ruminant is a ruminant'', different countries had different production systems and New Zealand's pasture-based system was ''incredibly different'' to those in the northern hemisphere.

That had taken some time to digest but learning about a different system was fun, she said.

Ms Murphy acknowledged she would not be where she was now without the faith and support of the Dairy Women's Network.

She had been pregnant with her elder son when she first got involved with the organisation. She described it as ''really go-ahead'' and supportive and encouraging of women in the dairy industry.

''The Dairy Women's Network ... gave me pointers and said `you can do this' and has given me some opportunities over the years so I could have a go. Without some of those opportunities, I wouldn't be where I am,'' she said.

One of the benefits of the overall dairy industry in New Zealand was its focus on capturing and improving the strength of people in the industry, regardless of gender, she said.

Although the industry had, and would continue to face challenges, those involved cared about their animals and the environment.

If the balance was not struck between animal welfare, good nutrition and being considerate of the environment, then ''we're going backwards''. The vast majority of dairy farmers were doing a great job in all those areas, she said.

Ms Murphy's favourite place to be was on a farm, talking to a farmer in a paddock surrounded by cows.

What she particularly loved to do was ''take the geeky science stuff'' and apply it in a meaningful way to make a positive contribution on-farm.

She was looking forward to the Dairy Women's Network conference, saying it was motivating and invigorating to be surrounded by ''so many neat women''.

The other finalists for Dairy Woman of the Year are Elaine Cook (Waikato), Wilma van Leeuwen (Waimate) and Katie Milne (Rotomanu).

Mrs Cook and her late husband, Wayne, progressed through the ranks from lower-order sharemilkers to farm owners, starting out in the Waikato and then moving to Southland in 2000.

In 2006, the couple won the New Zealand Sharemilker of the Year title, having already won the Southland regional title.

Mr Cook died suddenly in 2008 and the sharemilking was concluded with Mrs Cook and the couple's three daughters moving back to the Waikato.

She retained an interest in the South Island dairy industry and became a director of the Southland Demonstration Farm in 2011.

In 2013, she was named the inaugural associate director to DairyNZ, a six-month appointment, and she also holds roles as a strategic director for Young Farmers and chairs the governance committee for two Ministry of Business Innovation and Employment research contracts.

Mrs van Leeuwen and her husband, Aad, have expanded their dairy business over the past 29 years to milking 12,000 cows on 12 dairy farms, and started a contracting business in 1996.

In 1993, the couple and their six children moved from the Waikato to Waimate where they installed the first robotic milking system in a freestall barn system in New Zealand in 2008.

They recently commissioned the largest robotic milking freestall barn in the world, milking 1500 cows with 24 robots.

Ms Milne farms with her partner at Rotomanu on the West Coast. They have a small high-BW Jersey herd of 200 cows, fed on a grass-based system.

Ms Milne has been Federated Farmers West Coast provincial president since 2008 and is also on the national board, where she is spokesperson on adverse events, rural security, local government, ACC and employment.