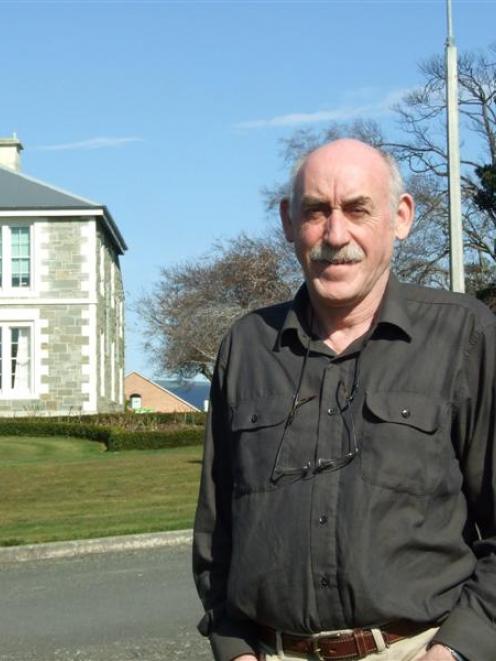 Telford director Prof Charles Lamb. Photo by Helena de Reus.
Telford has seen many changes this year and, this month, will also have a new director.

From October 10, Prof Charles (Charley) Lamb will take up the top post at the former rural polytechnic.

Prof Lamb (58) is an associate professor and head of department of Lincoln University's business management, law, and marketing department.

He has been a member of Lincoln's staff for 28 years, and the opportunity to move back south to work at Telford - which he has a lot of respect for - was too good to miss.

"It [Telford] is a lovely place. I grew up in Southland so I've always had the South in my heart. Old Lincoln was more like Telford is now - it's more or less back to the future. Telford has been an incredibly successful training institution in its own right and it survived when others didn't."

Prof Lamb has big plans for the former rural polytechnic, and hoped to see staff swaps between Lincoln and Telford, and the development of specialist programmes.

"I think Telford has huge potential. It makes Lincoln quite unique through vocational and higher educational study. We have the opportunity to do something different and can integrate Lincoln programmes into Telford."

Prof Lamb was born in Invercargill and when he left school, worked at Ocean View Freezing Works in Bluff before joining the Royal New Zealand Air Force for 10 years, flying C130s and Strikemasters. When he left the air force in 1979, he went to work at the Belfast freezing works and also worked as a wine waiter while studying at the University of Canterbury.

Prof Lamb graduated with a bachelor of commerce and econometrics (mathematics and statistics) and has spent the past 30 years as the owner of a market research company while also lecturing at Lincoln University, specialising in statistical economics.

He still has a passion for aviation, and built his own light aircraft - a Denney Kitfox - from a kitset but it is his love of motorcycles that he talks about most.

Prof Lamb is a Lincoln researcher in all aspects of motorcycling and motorcyclist behaviour, and owns four vintage German mopeds, a BMW K1200 RS touring bike, and a 1941 Indian motorcycle he bought with his oyster-opening money when he was 14 years old. His wife Ann owns a Triumph Bonneville.

Prof Lamb planned to display his Indian motorcycle at Telford, and said he would enjoy riding around the district.

"There are some fantastic roads for motorcycles in Otago and Southland, great views and a great ride."

He has been spending two days a week at Telford during the past few months but is looking forward to taking up the role full-time next month.

• Bruce Chapman, also an associate professor of the university, is the interim director until Prof Lamb officially takes over on October 10.

On January 1, Telford Rural Polytechnic - which was founded in 1964 as a farm training institute - became Telford, a division of Lincoln University, New Zealand's third-oldest university, founded in 1878 as a school of agriculture.

Lincoln achievements
• Head of business management, law and marketing department.
• Director Australasian Institute of Motorcycle Studies project.
•C onsultant for a wide range of organisation in the public and private sector.
• Inaugural winner of Lincoln University special achievement award for excellence in teaching.
• Researcher in all aspects of motorcycling and motorcyclist behaviour.