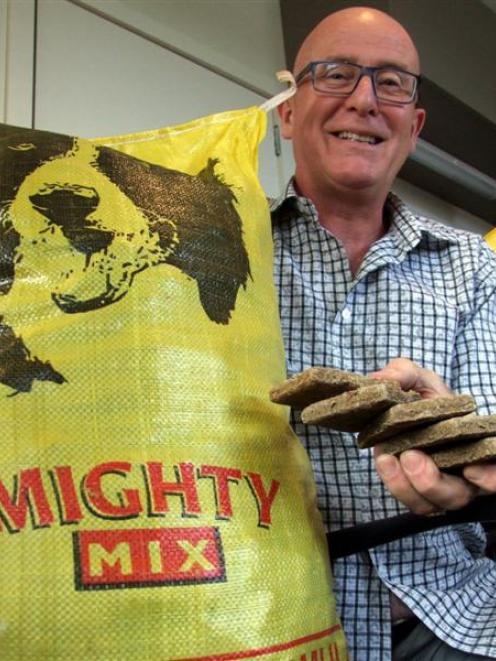 A woman's concern for the health of her working dogs during extreme weather conditions more than 20 years ago led to the development of a business which now sells products throughout New Zealand.

In June last year, Mighty Mix's head office opened in Oamaru, the home of newly-appointed general manager John Walker, who has spent 35 years in the food manufacturing industry, most recently as site manager for Rainbow Confectionery.

Initially becoming involved as a business adviser, Mr Walker liked the story behind Mighty Mix and its rural roots.

It was Christine Drummond who, when concerned for the health of her dogs on a high-country station during the big snow in 1992, took to her kitchen to help them through the extreme weather.

Using natural ingredients, drawing on her background of naturopathy and homeopathy, and testing it on her dogs, she developed the original Mighty Mix product - frozen concentrate.

Neighbouring farmers heard about it, word spread and it ''snowballed'' and a property was eventually bought in Blenheim to manufacture the product.

In the mid-2000s, dog biscuits were developed which were now manufactured under contract in Wanganui, while the frozen concentrate continued to be made in Blenheim.

Mr Walker first became involved with the business in June 2012 as a business adviser, when owner Colin Drummond, from remote Erewhon Station in Canterbury, sought some advice.

Last year, after seven years at Rainbow Confectionery, he was brought on board as a shareholder of Mighty Mix and also general manager. One of the main attractions of the career change was managing a business that he had a stake in, he said.

Having forged a career in an industry that included dairy, bacon, ham and smallgoods, and confectionery products, dog food was just another manufacturing process, he said.

With strong ties to the North Otago community, Mr Walker was not interested in relocating. The office opened in June and he was later joined by a part-time administrator who worked 15 hours a week.

Mighty Mix is a franchise operation with 21 franchisees throughout the country and two distributors.

When he started, there were ''a couple of gaps in the fence'' including North Otago. The district was now looked after by Mr Walker and his partner Susie Scott which had given him insight and an understanding of the franchisee side of the business.

''In terms of knowing your business, it's quite healthy to be involved in the actual selling,'' he said.

While their products were highly nutritious and ''damn good for your dogs'', they were also one of the cheapest feed options on a cost per feed basis, he said.

Emphasis was placed on personal service, with orders delivered to the client's door, freezer or shed throughout the country.

''All of our franchisees either ring, email or text their clients on a four- to five-weekly cycle so it doesn't matter if you're on the northernmost sheep station in New Zealand ... you know if you're a Mighty Mix customer that every four to five weeks somebody will be in contact with you somehow to arrange for your delivery,'' Mr Walker said.

A growing part of the market was urban customers and the company had more than 600 clients in Wellington, while Auckland was also a big market.

The urban market was becoming increasingly important with the increased number of dairy conversions and therefore fewer working dogs.

Dog food was a highly competitive market, he said. There was a lot imported into New Zealand and some also exported. Mighty Mix was ''just a very small part of it'', Mr Walker said.

However, the company was growing - ''every year we move up another notch or two'' - and it had no interest in ''taking on the big guys''.

''We want to be niche operators with a consistent, quality product, providing exceptional service to our clients,'' he said.

It had a few retail outlets but that was not a priority.

''We want to stick to our core and that's personalised service,'' he said.

While the company concentrated on old-fashioned service, it did have the ''smarts'' in the business, in terms of modern technology for ordering, he said.

Mighty Mix will be among more than 700 exhibitors at the Southern Field Days at Waimumu, near Gore on February 12-14.

More than 26,000 visitors are expected through the gates at the 17th biennial event.