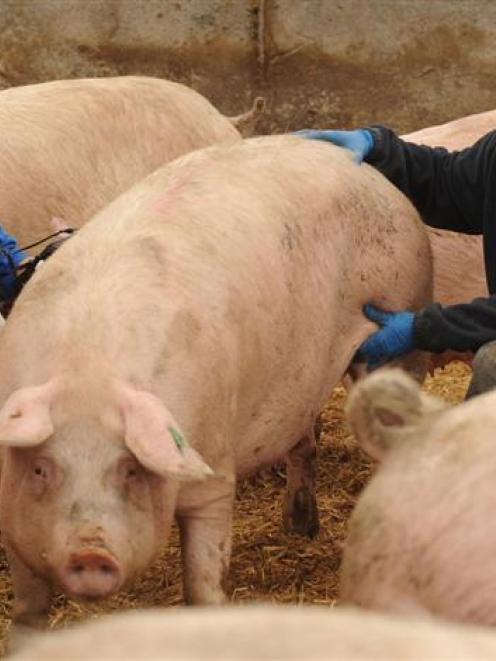 Long-time pig farmer Peter Bloem estimated his operation was producing an extra 1500 pigs a year from the same number of sows.

He had become frustrated with New Zealand workers who were "lazy, unmotivated and didn't want to go the extra mile to learn anything".

He was given a contact in the Phillipines through his pig-breeding company, and the contact's uncle, brother-in-law and nephew came to work on the property about 2007.

Two of the Filipino workers remain on the property, while a third has moved on but has been replaced. They were all quick learners and very motivated to get excellence performance, Mr Bloem said.

They came to New Zealand for the same reasons his parents came from Holland - better opportunities.

The operation comprises a total of 3000 pigs, including 300 breeding sows. Having motivated and competent staff was important, as every sow mated meant deadlines that had to be met further down the track.

In all his years as a pig farmer, there were probably only four or five staff that he would previously have considered worthwhile to send for further training.

He encouraged training and one of his Filipino workers, Jimmy Malit, recently achieved a herd manager qualification through industry training organisation AgITO.

Mr Bloem, whose son is a third-generation pig farmer and is herd manager, said the pork industry was "really tough going".

There was a "huge" amount of pork - 700 tonnes a week - being imported into New Zealand and he sometimes wondered if pig farmers were "ever going to get good times again".

The Ministry of Agriculture and Forestry will defend in court this month its decision to allow the importation of fresh, uncooked pork from Canada, the European Union, Mexico and the United States.

PRRS, a highly contagious disease, can cause stillborn fetuses, abortion or respiratory sickness.

While 2001 was the last time the farm made "decent" money, Mr Bloem said he was still passionate about what he did and gain a sense of achievement, especially in terms of the productivity gains over the past three or four years.