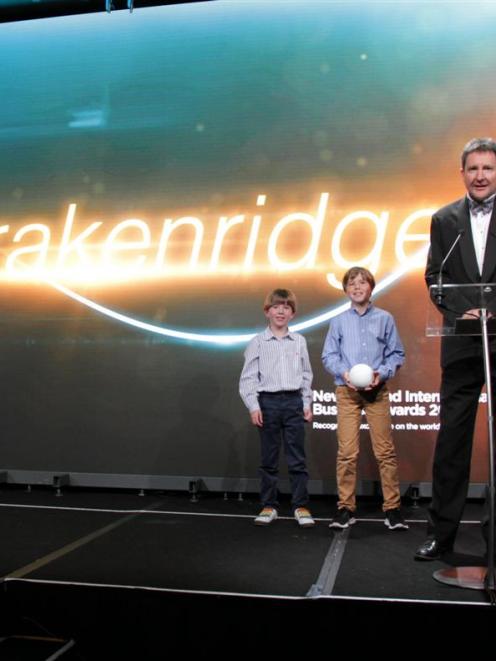 And it is that innovation that has seen both the company and Mr Brakenridge recognised at the New Zealand International Business Awards.

The judges commented that by ''flipping the traditional, production-led and commodity-based merino-growing industry on its head'', NZM had delivered a much-needed innovative approach to marketing an agricultural commodity.

They also mentioned how Mr Brakenridge started with ''a very clear vision'' of what the industry needed to do to move merino out of the commodity basket and up the value chain.

''He has been resolute in his pursuit of that vision. Overcoming reluctance from some in the industry to challenge the status quo and do things differently, John has been a catalyst for change.

''[He] has transformed the New Zealand merino industry and created significant value for its multiple stakeholders.''

Mr Brakenridge said the awards were recognition for NZM's growers and for the company's clients.

He acknowledged the efforts of NZM's 700 growers and their determination to continue to innovate, along with the work of the team at NZM and its brand partners.

''Our growers, from 12 years ago, determined that without investment and innovation, there is no future.''

Without that innovation, he believed the industry would be struggling. And it was innovation that kept Mr Brakenridge and the team at NZM motivated.

''It's our ability to come and try new things knowing we're going to have a largely receptive grower base who do understand the need for change [and] are prepared to have a go at something new.

''In comparison to a whole lot of other jobs, within something like this, the team here feels you can make a difference,'' he said.

NZM is holding a series of grower roadshows this week with the aim of gaining insights from growers.

While meetings often involved spending time giving presentations and answering questions, the company was going to ''flip that on its head''.

Growers would be asked what was most important for them, what was ''over the horizon'' and where the company's emphasis should be with regard to its investment.

''As a business, we're only going to survive if we're relevant. Meanwhile, the market and a whole lot of circumstances are changing. We've got to change with those to stay relevant.''

There had been a ''huge'' amount of change in the luxury market, fewer suits being sold and much more fine and ultrafine wool being produced worldwide.

''We're having to work on a whole lot of innovation, new product development and new markets,'' Mr Brakenridge said.

In the outdoor activity market, the company had to look at how to align itself with its brand partners to help them keep that innovative edge.

A government-backed strategy, through the Primary Growth Partnership (PGP), was developed in response to increasing pressures from competing land use and competitive threats from around the world.

The company was trying to get the sheep industry back to being a mainstay of the New Zealand economy.

The PGP initiative had helped the company define its strategic direction, he said. Key areas in which it could benefit growers were in helping them improve on-farm productivity and through production science and forage work.

Also important was how it could continue to influence prices growers were getting for their products in the market, through ensuring farmers were made aware of market trends so they produced what was in demand.

The company was also looking in a broader sense at how it could influence its suppliers' income, such as with its partnership with Silver Fern Farms - it partnered with SFF in the launch of Silere Alpine Origin Merino - and the work it was doing with co-products, such as leather.

NZM liked to think of its model as being ''people to people'' rather than ''business to business'' or ''business to consumer'', Mr Brakenridge said.

''That might not sound that different but it actually is. It's about building relationships, treating them as people [and] getting their insights rather than thinking of them as businesses.

''I think that within New Zealand, the difficulty is we underestimate the power and the force of the status quo.

''It's not as though the status quo is bad or anything like that but, just overall, people and businesses and support structures are largely resistant to change.''

NZM was putting much time into the likes of its grower meetings and conferences to ensure people understood the need for change ''and to also understand where we need to be changing as a business''.

The company liked the idea of ''that whole ecosystem'' where businesses, universities, research organisations, venture capitalists and innovators worked together.

''If we, as a New Zealand company, want to compete with the world's best, if we want to be relevant through to fast-changing channels to market, then we need to be up there and working with the global leaders in that, and often New Zealand businesses have been too shy to do that.

''Yet, when we do go to places like that ... there's something about our New Zealand approach that people appreciate.

''We're there, we listen, we're empathetic ... People seem to connect with us and that helps us hugely''.

NZM had been able to go to some of the world's most prestigious brands and have ''very high-level'' strategic discussions with them.

Mr Brakenridge was concerned New Zealand was continuing to ''very much go down the easy commodity route'' and there was not enough emphasis on working out what was special about what it did.

That was why conversations had started with primary sector companies and there was a willingness to start to consider that approach.

''We could be targeting the same people for meat as a fishing company might be for their fish products, as a wine company ... but historically there's been almost no conversation to get across industry companies to work collaboratively,'' Mr Brakenridge said.

''Instead, all of the politics and everything you read about is all `Hey, how do we get competing companies to work together?'

''Whereas ... there could be a more immediate and logical solution of saying 'Hey, let's get a coalition of the willing for those people that want to target the higher-end consumer that individually might not have the resources but collectively would have.''

New Zealand's primary sector was largely still based on the circumstances of the previous century and out of touch with this century and even the next five to 10 years, given the world had changed considerably and the channels to market were changing, he said.

Those conversations had started and included the establishment of a ''boot camp'' initiative, bringing together primary sector leaders.

There was a heavy emphasis on talent development and how to work with individuals and institutions to develop talent that was relevant.

''A lot of our universities haven't adjusted their curriculums fast enough and actually aren't as in touch with the changing business needs to be putting out the type of talent, with the type of skills, we need,'' Mr Brakenridge said.

While respecting everyone who ''got us where we are today'', the reality was that the commercial environment being entered into was going to be quite different.

What was needed in terms of people, businesses and research and development was likely to be quite different.

An analogy drawn in a boot camp discussion was ''it's not about making the current boat go faster, it's about redesigning a whole new boat''.

''We need to be very careful that, even if we've got something of an edge, others are learning of our edge very, very quickly.

''If we don't keep shaping and investing and moving, we'll be like that last race [in the America's Cup] where we just watch a boat that has just learnt from us so quickly and ... is moving so much faster than us.

''That is no way criticising Team New Zealand, because we just think what they did was amazing, but there is a lesson in it for all of us and we just don't feel that New Zealand is innovating enough,'' Mr Brakenridge said.

''From a broader concept, we are perhaps selling our technology too quickly and without the development of IP [intellectual property] so that these other countries could `do an Oracle' to us.''

Mr Brakenridge was heartened by the enthusiasm among New Zealand businesses across the primary sector to share knowledge, insight and opportunities.

''There is a maturity occurring now within some New Zealand primary sector businesses of the idea that `Hey we don't have to do it all ourselves and there's a whole lot of benefit that we can get by working alongside each other'.

''That doesn't suit everybody. A number of companies still want to go off and do it in the way of last century and you can't really force that on them.

''But I think, over time, the market selection will work that out. Farmers will be smart enough to understand that they need to back the companies that are differentiating,'' he said.