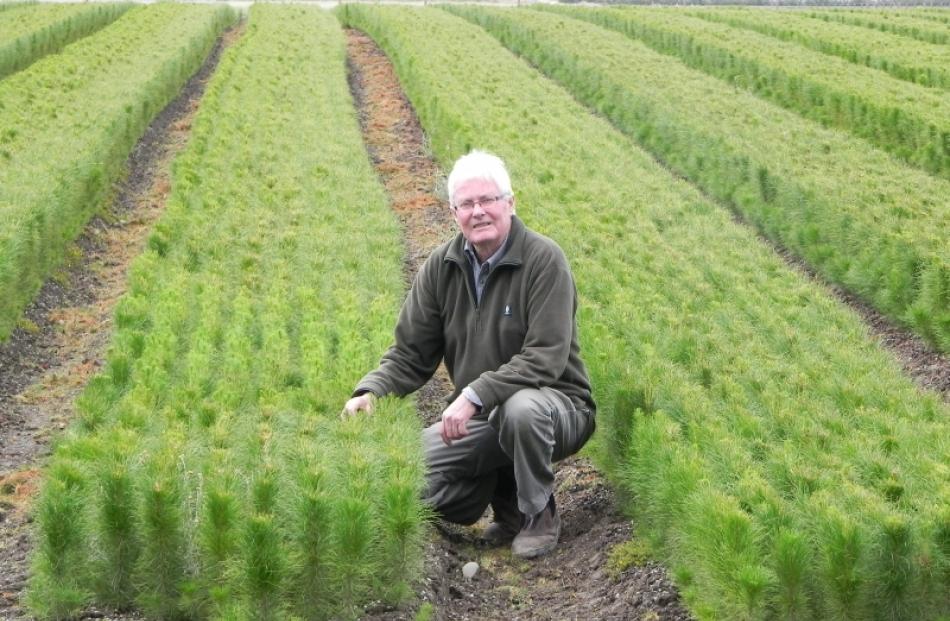 Leithfield Nursery owner Graeme Dodds with live pine tree seedlings in his nursery. Mr Dodds had to destroy about 700,000 seedlings after demand for them in carbon forestry plantations dropped due to low carbon credit prices. Photo by Russell Frederic

Hundreds of thousands of pine tree seedlings have been destroyed as the carbon emissions trading scheme unit price collapses.

As the price of carbon credits dropped, plantation of carbon forests severely declined and demand for pine tree seedlings decreased, leaving nurseries with no option but to destroy excess seedlings.

Graeme Dodds, owner of Leithfield Nursery, near Edendale, said he had to destroy about 700,000 pine tree seedlings, which were mulched and ploughed into soil.

At a cost of about $220 per thousand seedlings, the business had lost a sale worth $154,000 before production costs.

Mr Dodds said he planted the seedlings thinking there was a demand and a market for them.

''It was set to create a market. Going back, the Government rung around to check capacity [of nurseries] because they expected more planting around New Zealand. It started and then disappeared almost overnight.''

Robin Appleton, co-owner of Appleton's Nursery near Nelson, said the business had to spray about 300,000 Douglas fir seedlings with herbicide.

The company had to pay for the cost of the seedlings, which had been grown to order before clients pulled out, but he did not want to think about the cost, Mr Appleton said.

He was aware of other nurseries who were in the same situation.

Alongside other factors, competing land use from other high-return industries such as dairying had contributed to a drop in pine tree seedling demand.

Unrestricted imports of credits from overseas with no guarantee of environmental gain at their origin resulted in ''hot air'' credits effectively worth nothing, he said.

The Government handing out of credits ''like lollies'' as rewards for good behaviour in different sectors had flooded the market, driving down prices, and exclusion of the agricultural sector from the ETS had reduced credibility of the scheme, he said.

In comparison to the current situation, New Zealand had potential to be the first greenhouse-gas neutral country in the world, if the planting of about 2.5 million hectares of radiata pine occurred.

Doing so would have huge benefits for New Zealand's export prices and marketing, he said.

In order to revive the ETS, people would have to agree there was a problem, and be willing to have policy in place to encourage participation, as well as full inclusion in the scheme, he said.

Pricing required to encourage people to expand carbon forests was estimated to be about $15 per carbon credit, about five times higher than it was presently.

One tonne of sequestered carbon dioxide (CO2) was worth one credit, with 1ha of pine forest able to sequester roughly 30 tonnes of CO2 per year.

Prof Mason said he could not understand why dairy farmers did not engage in an economically beneficial system when the impact of carbon credits on gross margins was so low.

''They [dairy farmers] quote about 600-700kg of milk solids produced per tonne of CO2 emitted, even if they pay full price on emissions on dairy farms it would only have tiny effect on gross margins,'' he said.

Federated Farmers Southland provincial president Russell MacPherson said the reason the agricultural sector had been excluded from the ETS was because pastoral farming was carbon neutral.

''Thank god the National government had the sense to not include pastoral farming as carbon emitters.''

''Anybody with year 11 science will understand that pastoral farming is a closed carbon cycle,'' he said.

Mr MacPherson said lack of demand for pine seedlings, destined to be planted in carbon forestry, resulted from a collapse in carbon credit pricing, and conservative spending on ''essentials'' only after the global financial crisis.

The Ministry for Primary Industries did not respond to requests for comment on the issue.