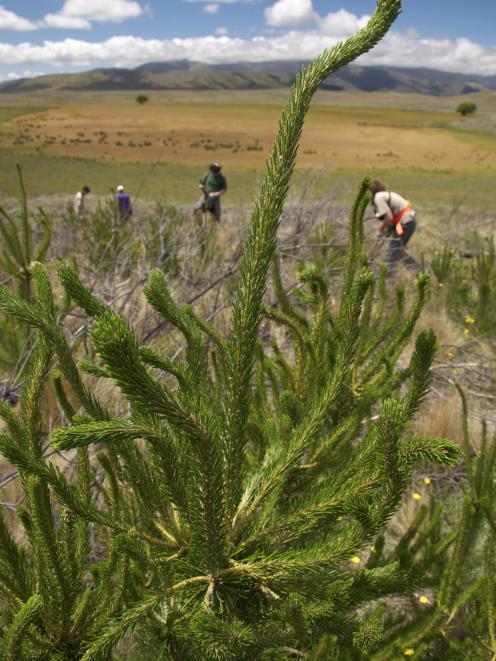 Work on wilding tree removal is taking place throughout the high country. Photo: Fraser Crichton.
Progress is being made collectively to address the challenges in the high country, Department of Conservation partnerships manager Jeremy Severinsen says.

His comments followed a scathing attack on Doc by retired high country farmer Tim Scurr, now living in Wanaka, who said the high country had to be restored and replanted urgently.

Mr Scurr said he had grown up admiring the mountain tops of the high country "and all that they provide", particularly water.

But management of those mountain tops had "fallen into the wrong people’s hands".  They did not understand a balance of what was needed for sustainable land. Snow tussock  held snow back, shading and protecting, keeping the snow as long into the summer dry as conditions allowed, Mr Scurr said.

The low flow of rivers, dams, lakes, bores and springs were all subject to poorly managed high country of the Southern Alps, he said.

Insects and weeds were killing off the tops, which was in turn affecting water supply and giving more pollution in forms of erosion.

Mr Scurr believed the catchment needed a management strategy to stop the killing of, particularly, tussocks and other plants. It would be wrong to say farmers  had caused the degradation, he said.

The catchment board approach and ideals were realistic and progressive during their time, along with the help of the wild game recovery industry of namely deer, also supported by casual, safari and  Doc hunters of goats, chamois and tahr.

Income from the export of wild game returned huge earnings while those animals in the reduced numbers kept the snow tussock and other plants open and healthy while still regenerating all but a small percentage of land.

"You need a few animals around the tops, and good quality farmers," he said.

Farmers were excellent stewards or managers of the lower reaches of the high country.  Their efforts and pride of success over at least 95% of that country had never been acknowledged.In contrast,  Doc was not a  good neighbour  and paid no rates, he said.

Steep gullies and hillsides should be kept open with not much heavy growth, as soil structures could not handle the over burden.

Slips of trees, shrubs, plants, gravel and soil were caused when water run-off could not be controlled.

"Our many broadleaf tussocks and other high country shrubs and plants can help, to a huge extent anyway. The soil and erosion is a huge factor, a form of pollution that causes huge effects with flooding."

Naturally formed dams and blockages of trees and plants gave way and added to the flooding. Mr Severinsen said the majority of management challenges in the high country were cross-boundary challenges.

There were things Doc needed to be working on — and it was making progress — but there were things it could not do alone,  such as wilding tree, wallaby, gorse and broom control.

Pests did not pay attention to "boundary lines on maps" and a partnership approach was needed, he said.

Doc was working "very well" in partnership with high country landowners and other agencies such as the Ministry for Primary Industries.

Wilding trees were an example  and a lot of work had been done in the past  few  years through the length of the high country. That included $1.5million spent, in partnership with MPI and landowners, in the Wakatipu Basin, $90,000 in the Godley Valley, $120,000 at Hanmer Springs and $300,000 in the Hakatere Basin, and that  would continue across other parts of the high country in coming seasons.

It was not a job that Doc could do by itself, Mr Severinsen said.

Doc had a policy of being a good neighbour. It sometimes inherited land with weeds on it and it was committed to making sure weeds were controlled so they was not creating problems for neighbours.

There was a lot of degraded land in the high country and a lot of science was being done in the area, he said.

Doc was "absolutely aware" of the water yield studies related to tussocks. One of the biggest threats to that was wilding trees, and the work being done on  them

had benefits not only in terms of biodiversity and landscape, but also ecosystem services.Doc did have some grazing concession in the high country; there would be land that could sustain that, and land that could not.

Mr Severinsen said there were challenges in the high country that were not resolved yet, but progress was being made. The most important thing was to work together, including farmers and Doc and "whoever else."