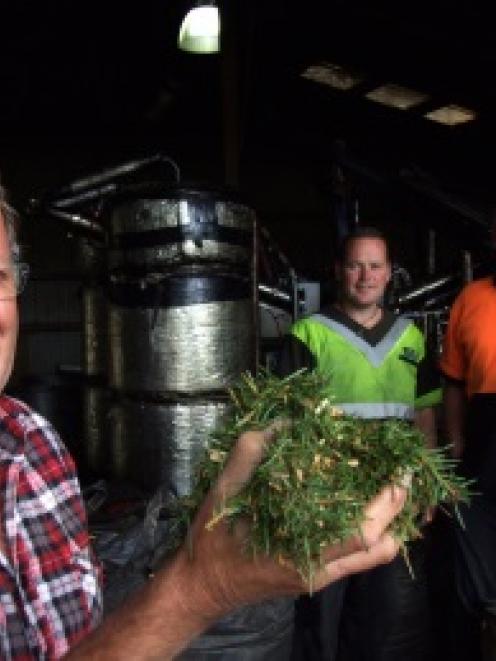 Paul Greaves (left), with son Jared Greaves and Steve Johnson, who holds a bottle of oil, are turning Douglas fir into essential oil at a still near Beaumont. Photo by Sally Rae.
When Paul Greaves suffered a brain stem stroke back in 2012, it forced some major changes in his life.

Not only did he have to learn to walk again but, after more than four decades working in the forestry industry, he found he could no longer handle the high pressure of his job.

But a passion for the industry remained and, when he met Michael Sly, now a director of Wilding and Co, and Mathurin Molgat, and they talked about wanting to turn Douglas fir into essential oil, his interest was aroused.

Mr Greaves had been thinking about such a thing for about eight years but did not have any knowledge of the market.

Now Mr Greaves and his ForestPlus Oils team are working with Wilding and Co to produce oil for Utah-based DoTerra, the world's largest essential oil reseller, and sending oil to the United States every two weeks.

New Zealand Douglas fir oil was launched to 40,000 delegates and an online audience of two million at a convention in Salt Lake City in September, after Wilding and Co signed a multimillion-dollar global deal to supply DoTerra for the next four years.

Designing a still to carry out the vacuum distillation of the tree parts to produce the required oils was a new experience and Mr Greaves enlisted some advice from his brother.

The still was designed by Mr Greaves and fabricated by Paynes Aluminium in Mosgiel. Following his stroke, he found he could only focus on a single element, so he focused on building each part of the still, rather than its entirety.

He realised manpower was needed and he brought his son Jared Greaves and another forestry industry stalwart, Steve Johnson, on board. Meetings were held with forestry companies who were supportive.

It was not until Mr Greaves went to Utah and saw what DoTerra was doing that he realised the concept had a lot of merit.

Up until then it had been a ''wilding story'', which he likened to a small backyard operation producing the likes of lavender oil.

When he saw the enormity of the DoTerra business, he realised they had ''something''.

Since then, he and his son and Mr Johnson had been working hard and developing the still, which has been share-funded by Wilding and Co and ForestPlus Oils.

The mobile still, which is based in a shed near Beaumont, produces about 55 litres of oil a week and it has been a steep learning curve for all concerned.

It has been running since about mid-July, working 22 hours a day and, while there were some teething problems, much had been learned.

Mr Greaves was keen to hear from farmers with Douglas fir stands, who might have branches coming over fences that they wanted dealt with, within about a 35km radius of Beaumont.

About three days of tip-cutting provided enough material to run the still for five days.

Ernslaw One had given the team access to two forestry blocks at Dipton and they were considering shifting the still to Southland for a month.

The still was trailer-mounted and designed to be robust enough to go anywhere. It could be copied in other regions.

While forestry was traditionally used for timber, the team was using waste to create a business and employment. It was ''thinking outside the square using a resource that usually goes to rot,'' Mr Johnson said.

The operation was not restricted to one species. DoTerra was interested in another two and other companies had expressed interest in using the stills. Other species had been tried, including macrocarpa, larch, Pinus contorta, manuka and thyme, all with varying degrees of success.

Douglas fir originates on the west coast of North America but New Zealand's trees produce a much sweeter oil than their North American counterpart.

The biggest problem had been getting funding. It was a small, start-up business that was ''under the radar'', Mr Greaves said.

Jared Greaves said there was still a lot of research and development to do to make the system ''even better''.

Paul Greaves, who is attending a bioenergy conference in Hamilton next week, was also investigating biochar and bio-oil options.

The system had the potential to make the equivalent of about 1000 litres of bio-oil and 700kg of biochar a day, meaning a carbon footprint of zero.