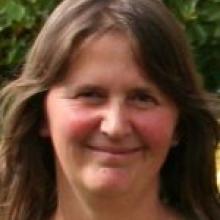 Marion Johnson
It is a long way from managing a farm in the UK to being a research fellow in Dunedin - but Dr Marion Johnson has led an interesting life.

Dr Johnson, who grew up in Zambia, the UK and New Zealand, initially studied agriculture at Massey University.

She worked as a shepherd around the Wairarapa before shepherding on hill farms in Wales and Scotland. There she observed the Welsh mountain sheep eating herbs and "shrubby things" (not ryegrass and clover) and the sheep in Scotland eating the moorland plants. All the stock were very healthy.

Already inspired by an old shepherd in New Zealand who was always saying "Put them out on the long acre, they'll sort themselves out", that got her thinking further.

She then got "the most wonderful job" working as a farm manager, running the largest flock of Charolais in the UK.

The sheep did well eating a broad diet and won at shows.

From there, Dr Johnson came to Otago and, mainly based at AgResearch, gained her PhD on lungworm infections in farmbred deer, followed by postdoctoral study looking for antiparisitic native plants.

Now a research fellow based at the Centre for the Study of Agriculture, Food and Environment, her research programme involves translating elements of Te Rongoa (traditional Maori knowledge of medicinal plants) into farm management practices and includes looking for plants from traditional Maori medicine that could be planted on farms and browsed to improve animal health.

She has been funded for part-time research by Nga Pae o te Maramatanga, a centre of research hosted by the University of Auckland, which conducts research of relevance to Maori communities.

A long list of plants, from cresses to native dandelions and docks along with shrubs and trees, are all known in Maori lore as good tonics, or for aiding recovery from illness, or being generally good to eat. She was also looking at plants that encouraged lactation, along with plants around the yards for wounds and poulticing.

She was keen to hear about alternative diets or any information about medicinal effects of any plants animals have grazed.