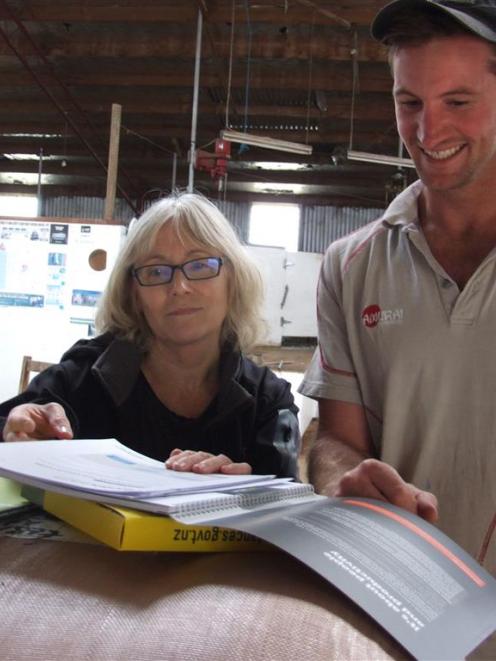 Nobody wanted to adhere at the start, then it became a generational change; advertisements targeted children, who quickly began to "click'' and encouraged their parents to do the same.

"I think this is similar. It'll be a generational change as well,'' the WorkSafe Otago health and safety inspector said.

WorkSafe New Zealand's Safer Farms programme is working with the rural sector to promote good health and safety practices and reduce the high rates of accidents and fatalities on farms.

The new Health and Safety at Work Act came into effect on April 4 and many farmers understandably had questions about it, she said.

On-farm visits were a good way to get to know farmers and answer those questions, along with speaking at farm discussion groups.

That all helped with demystifying Health and Safety "or people not being afraid of us''.

"I don't think there's anything to fear in the new Act. It makes it really clear what people's responsibilities are. I think that's a good thing,'' she said.

WorkSafe was trying to make things simple and give people as much information as possible to help make their Health and Safety easier.

Some people thought it was so hard and there was so much paperwork, compliance and, subsequently cost, involved, that they did not know where to start.

"It's not rocket science. When I talk to people about Health and Safety on farms ... I say to them, just think about the things that can go wrong and what's the worst that can happen and how I can stop that happening.''

Once that was done, then they were "most of the way there''.

Usually, when investigations were done on properties following an accident, it was more than one thing that went wrong.

It was often a series of "unfortunate events''.

Every farm was different, whether it was terrain or people, but it was all about everyone working together and keeping each other safe, she said.

She recently visited the Lawson family's East Otago sheep and beef farm, Moana, to talk through Health and Safety matters.

The 2300ha property, near Waikouaiti, is run by brothers Rob and Willie Lawson, with their father Jim.

Willie is the appointed Health and Safety contact for the farming operation, which runs 10,000 stock units.

That included a hazard register involving the likes of machinery, the woolshed, yards and vehicles.

With major agricultural work on the farm undertaken by contractors, it was good to get some clarity around contractors, he said.

Their shearing contractor had already provided them with their Health and Safety plan and an induction had been done.

That was "still a bit of a work in progress'' for some but it was key to know when they were on or off the property, he said.

In the new Act, everyone had a responsibility for Health and Safety and contractors were just as much responsible for their staff as the farmer was, Lynn Carty said.

Contractors had a duty, when on a farm, to ensure their workers were working safely.

Concurrently, farmers needed to know they were safe on-farm and that they had been told of any hazards.

The Lawsons gave a run-down of any hazards in the area where contractors were working, if there were any.

Their major hazard was terrain; the steepness of the hills and the ruggedness.

For Willie, putting a helmet on after walking an hour on the hill in 25degC on a summer's day "just doesn't make sense''.

While they had helmets and did wear them a lot of the time, they tended to be more preventive in the sense of understanding how to ride their bikes. There was an emphasis on "not getting into trouble on your quad-bike'', particularly in wet and greasy conditions.

In January, Willie walked about 10km home from the back of the property, after leaving his quad bike as he decided it was too dangerous.

They would use helmets more, he said.

Lynn Carty said there were quite a few different kinds of helmets on the market now and she encouraged people to try them out and find one that suited and that they would use all the time.

For farmers, particularly with large properties, they needed to look at what they had in place for working alone to ensure their safety.

Some had emergency position indicating radio beacons (EPIRB), radios in vehicles or a satellite phone.

If there was cellphone coverage, there were applications like Get Home Safe that could be used.

She encouraged people to think about how to get help ASAP if working alone and something went wrong.

Communication between Rob, Willie and Jim and their partners was "pretty good''.

They usually had knowledge of where they were and, generally, how long they should be away for, Willie said.

Jim Lawson said there had been so much progress in farming, whether it was environmental aspects or Health and Safety, compared to when he was young.

"There's no question farmers in general are so much more aware of safety aspects,'' he said.

Farm safety plans can be made on the Safer Farms website (www.saferfarms.org.nz)