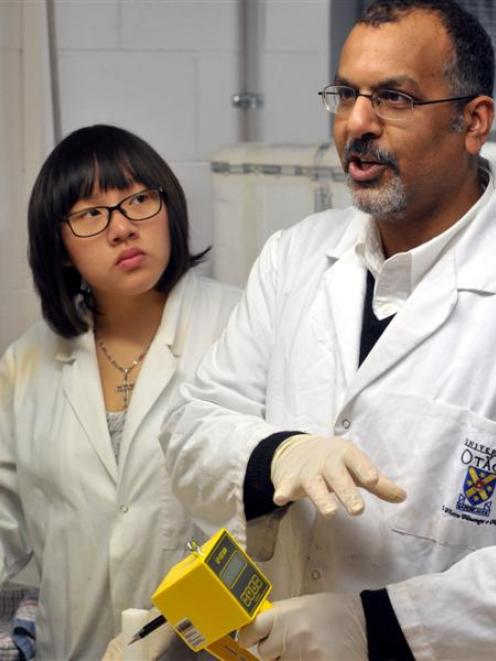 Dr Alaa El-din Bekhit outlines a research project on meat tenderness, watched by masters student Via Suwandy. Photo by Gregor Richardson.
It has been an electrifying experiment.

A research team at the University of Otago has been using short bursts of high-voltage electricity in a bid to improve the tenderness of red meat.

The research, in conjunction with Alliance Group and led by Dr Alaa El-din Bekhit, of the university's food science department, has been cited as having the potential to open up new opportunities for lifting returns on lower-value carcass cuts.

Tests on a range of beef cuts from Alliance Group's Pukeuri plant have found the use of pulsed electric field (PEF) technology could enhance tenderness.

While electrical stimulation has been used on whole carcasses since the 1970s, its tenderising effects were limited to a few muscles on the carcass.

As the PEF technology had the potential to improve the tenderness of individual muscles, it could help meat processors capture the maximum economic benefit of each cut of meat from a carcass.

By lifting the value of that carcass it was, in turn, improving returns for suppliers, Alliance Group's marketing development services manager Gary Maclennan said.

Dr Bekhit said the study was the first step in determining how PEF technology could be applied effectively to fresh-meat processing.

Tenderness was arguably the most important quality attribute of red meat, he said. After the meat was cooked, many of the appearance attributes become irrelevant, and flavour could be influenced with other ingredients or added flavours.

The production of consistently tender meat was important as red meat was competing with other types of meat, such as poultry, and tender meat cuts also fetched a higher premium than the less-tender cuts, helping to maximise the financial gain, he said.

Mr Maclennan said factors such as the time elapsed from the meat being processed to being sold overseas could have an impact on the quality of meat that consumers purchased.

''The quality often comes down to natural aspects in the meat, which influence toughness, moisture and shelf life. This study indicates we may have greater control over these aspects.

''If we can increase the tenderness of our products to be at their best when they're purchased, our customers will be able to enjoy the best-tasting meat no matter where they are in the world.''

Dr Bekhit, who has been a meat scientist for 15 years, said the system, which used about 25,000 volts, was ''completely safe''.

There was no negative impact on the meat, and no side effects. The biggest hazard was for the operators but, if safety precautions were followed, there were no problems.

The same technology had been used for wine and juice to improve quality.

The meat project had been going for about 18 months and

was at the stage of understanding exactly how the technology worked. No sensory trials had been done, but that was something he would ''love to do'', he said.

Dr Bekhit also believed there was an opportunity for engineering firms to manufacture the technology required, saying the potential in the wine, food-processing and meat industries was ''huge''.