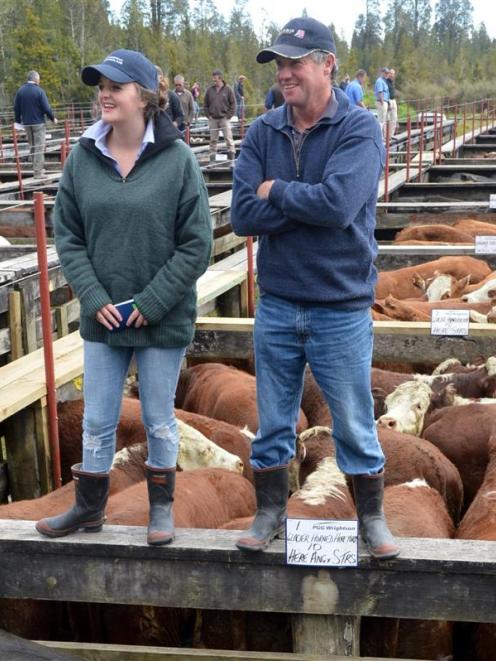 Fox Glacier farmer Wayne Williams and his daughter Laura with their cattle at the Haast cattle sale. Photo by Stephen Jaquiery.
Stud breeding is in Wayne Williams' blood.

Mr Williams and his wife Maggie own Glacier Horned Herefords at Fox Glacier, continuing a tradition that started back in the 1940s when his grandfather established a Hereford stud, then named Bluedale stud.

After he moved to Canterbury and took some of the cattle with him, Mr Williams' father took over the farm and the stud name was changed to Glacier Horned Herefords.

Earlier this year, the Williamses took two bulls to the national beef expo in Feilding - their first trip to the event. It was also believed to be the first time bulls from south Westland had been entered.

The Williams family has between about 80 and 90 stud cows, along with commercial cattle. It also runs about 400 ewes, and about 230 hinds are mated.

There were not a lot of horned Herefords around these days but Mr Williams believed they had a better frame, better constitution and were a better all-round animal.

He was hoping to head back to next year's beef expo but would "just see how they [the bulls] shape up" in the meantime.

The Williamses won supreme champion Hereford at last year's Canterbury A and P Show in Christchurch. They had another good show this year, winning reserve champion junior bull and later were placed third in the all-breeds from about 30 entries.

He had been bringing cattle to the Haast sale for a few years and, as far as prices, he "seemed to get right up there most times", he said.

From a stud-breeding perspective, it was also an opportunity to put his stock in front of others. He sold bulls throughout the South Island and also to the North Island.

The top six or eight pens of cattle at Haast were on a par with last year, price-wise, but the balance of the yarding dropped a little, Peter Millar, of PGG Wrightson, said.

There was a full clearance, with cattle sold to Canterbury, Southland, Otago and up the West Coast.

Most of the vendors were happy and, generally, prices were good, he said.