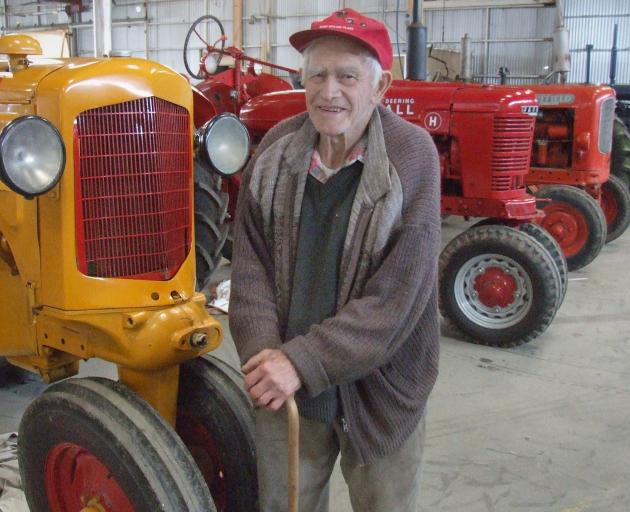 Vintage machinery enthusiast Syd McMann is selling his collection of tractors, implements and parts. Photo by Sally Rae.
Stamps are likely to be a cheaper collecting option than tractors.

Once Syd McMann sells his collection of vintage tractors, implements and parts, he will be turning his attention to philatelic pursuits.

With five albums full already and another 5000 stamps yet to be dealt with, Mr McMann (86) expected that would keep him ''going'' for the winter.

He has been busy recently preparing for the dispersal sale which will be held in the former Te Pari building in Humber St, Oamaru, on Saturday this weekend starting at 10.30am. PGG Wrightson agent Kelvin Wilson said the sale was ''unusual'' for North Otago.

Most of the collection came after Mr McMann retired from the Ministry of Works in 1990 although he had owned a 1947 Minneapolis-Moline tractor since 1953. It was running ''nice and quiet''.

He acquired a McCormick-Deering Farmall as it reminded him of the tractor his father bought to replace the six-horse team used on the family's Otepopo property.

Mr McMann drove that team when he left school at 13 before moving on to a different form of horsepower.

He had enjoyed his vintage machinery interest, picking up tractors from all over the place, including one from Stewart Island.

He had attended many vintage machinery rallies, transporting his tractors as far afield as Thornbury in Southland. His tractor collection numbered ''about 12 or 14 or something... ''.

Mr McMann was unsure how much interest the sale would attract, saying vintage machinery clubs were ''not like they used to be''.

However, he knew of intending purchasers coming from as far away as Blenheim and there had been calls from the North Island.

Some of the tractors had new motors and he still had a box of new valves his brother got from the United States for him about 30 years ago.