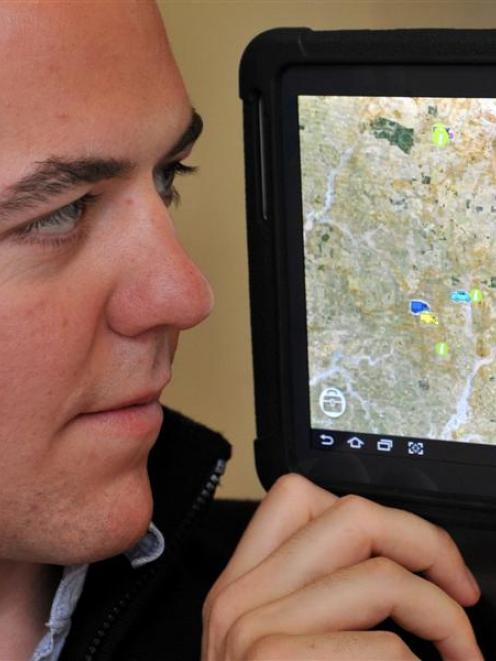 Andrew Humphries, from AgriTrack, checks the location of machinery working on an Australian farm. Photo by Craig Baxter.
It was while driving a tractor in Australia that Andrew Humphries came up with the idea of a software system to track farm vehicles.

After growing up on a sheep and beef farm near Gore, he headed to the University of Canterbury where he spent a year studying computer engineering.

He then returned to the farm for four years, flying to Western Australia each year to drive seeding rigs during the April-June seeding season.

He could be working in a paddock 5km square and not know what anyone else was doing in it. With changes in shifts, other workers ''wouldn't have a clue'' what had been done.

Knowing the application idea was technically possible, Mr Humphries created a test application which he took over with him, with two tablets, on his fifth season.

It allowed all users to see where all other users were on satellite imagery and he believed not many other systems did that. It could ''save a lot of stuff-ups'', he said.

His boss loved the idea so much that, within 30 minutes, he had rung his wife who was in Perth that day and asked her to buy seven more tablets to put in each of his main vehicles.

That proved to be a defining moment and, buoyed by that enthusiasm, Mr Humphries spent the next two months driving 13 hours a day and then sending emails to his developers, progressively improving the application.

Towards the end of the season, he showed it to another large farmer in the area and he instantly purchased the system for all of his vehicles.

Now settled in Dunedin with his wife and son, Mr Humphries planned to fly back to Western Australia in March, a month before the seeding season began.

The Australian market was ''huge'' and he also felt it was only a short time before some of the big agricultural machinery companies, such as John Deere, launched the same technology.

''Others will catch up. I'm very keen on keeping ahead of them,'' he said.

Acknowledging it was a ''big call'' to set up a business, Mr Humphries said it had been a a lot to learn as he came to grips with running a business. Dunedin was proving to be a low-cost base from which to operate.